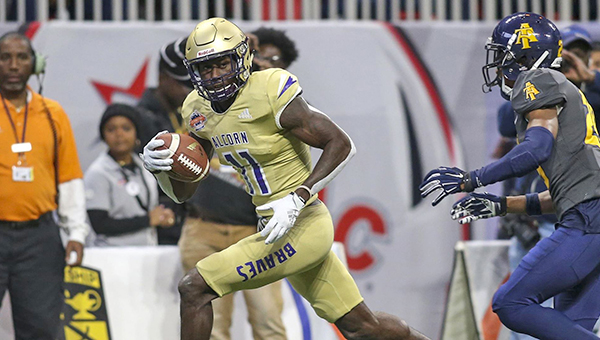 Alcorn State wide receiver Chris Blair (11) runs with the football during the Celebration Bowl against North Carolina A&T on Saturday. Blair caught seven passes for 150 yards and a touchdown, but the Braves lost 64-44. (Alcorn State Athletics)

It’s the third time in five seasons — and second in a row — that North Carolina A&T (9-3) has beaten Alcorn (9-4) in the Celebration Bowl.

“It was a tough battle,” Alcorn State head coach Fred McNair said. “On offense, I thought we did some great things. Defensively, we didn’t play as well as we should have and we didn’t play that perfect game that we were looking for — too many mistakes and too many points given up. We just didn’t get it done.”

The game featured 1,034 combined yards of total offense. The 108 points were eight more than had been scored in the last three Celebration Bowls combined.

North Carolina entered the game ranked third in total defense in the Football Championship Subdivision, allowing only 270.4 yards per game. Alcorn was 22nd at 336 yards per game.

“I didn’t expect it to be a shootout, I really didn’t,” McNair said. “(Quarterback Felix Harper) played the same way he did throughout the course of the year. It was just a matter of us trying to get stops to give the offense another chance, but that didn’t happen. I never would have expected this game to turn out like the way that it did.”

Carter completed 18 of 30 passes for 364 yards, and added 96 on the ground. Korey Banks and Elijah Bell each caught a pair of scoring passes for North Carolina A&T.

Banks finished with six receptions for 122 yards and two touchdowns.

Chris Blair caught seven passes for a career-high 150 yards for Alcorn, and Raidarious Anderson had eight receptions for 85 yards and a TD.

Harper was 25-of-42 passing for 341 yards and three scores, and added two more rushing touchdowns, but the Braves trailed 24-10 at halftime and NCA&T steadily stacked points from there.

Jah-Maine Martin helped NCA&T put the game away in the third quarter. He rushed seven times in the first half for one yard, but took the first play of the second half 75 yards off right tackle to score. Martin ran for 117 yards in the period. He finished with 110 for the game.

Although Alcorn State countered quickly when Harper scored on a six-yard run to cap a 10-play, 75-yard drive, NCA&T was quicker to answer when another long pass by Carter found wide receiver Ron Hunt wide open deep for a 43-yard score and a 38-17 lead early in the third.

Alcorn never got closer than 11 points in the fourth quarter, on a 1-yard run by Harper with 4:36 remaining. NCA&T returned a blocked PAT for a defensive two-point conversion, then iced the game with Martin’s 4-yard TD run a minute later.

“We needed to get stops, but we gave up too many big plays. I thought if we could get the deficit down to seven points then we’d be right back in it and had a good chance make a comeback,” McNair said. “We preached all week and during pregame meal about not giving up the big plays, but we had bad eyes from our corners and safeties.”