Phillips overcame injury, adversity to be the Post’s Player of the Year 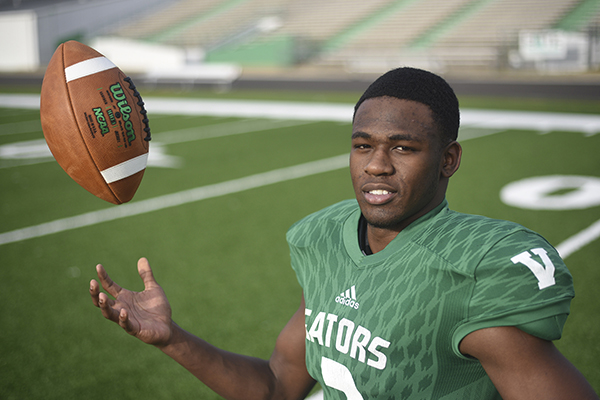 Vicksburg High running back Cedric Phillips is the 2019 Vicksburg Post Offensive Player of the Year. Phillips ran for 1,231 yards and 10 touchdowns this season, and was the first VHS player in eight years to rush for more than 1,000 yards. (Courtland Wells/The Vicksburg Post)

At halftime of Vicksburg High’s football home opener, Cedric Phillips walked into the team’s fieldhouse with a painful grimace on his face.

The index finger on his left hand was broken. For a running back that has to hold and hang on to the ball 20 or 25 times a game, it was the type of injury that could have destroyed a season.

With an open date the following week and a long season ahead, the trainer urged caution and suggested Phillips sit the rest of the game. She also said Phillips could keep playing if he could bear the pain.

It didn’t take long for Phillips to decide with path to go down.

“I played three plays before halftime when I was hurt. I got in the fieldhouse and it has hurting so bad, but at the same time I wanted to finish the game for my team. I was like, ‘Wrap me up and let me see if I can get back out there,” Phillips said.

He did indeed return to the game and finished with 182 total yards and a touchdown to help the Gators rally from a 21-point deficit before losing in overtime.

He kept playing after that, too. He topped 100 rushing yards in five of his last seven games and became Vicksburg’s first 1,000-yard rusher in eight years. And now, at the end of it all, he’s been rewarded for his grit and performance with The Vicksburg Post’s Offensive Player of the Year award.
It’s the second year in a row, and third time in four years, that a VHS player has won the award.

“It feels good. I kind of thought I had it, but at the same time I knew a couple other players had more than me. But it feels good that I got it,” Phillips said.

Phillips formed a potent 1-2 punch for the Gators’ offense with quarterback Sha’Kori Regan. The two players accounted for 96.8 percent of the team’s yardage and 31 of their 33 touchdowns.

While Regan slumped a bit in the middle of the season, however, Phillips stayed steady all the way through.

The senior had at least 85 total yards rushing and receiving in nine of the Gators’ 11 games. He ran for more than 100 yards seven times, with a season-high 220 yards against Canton.

In the season finale, a 28-27 win over Holmes County Central, Phillips only had 44 rushing yards, but caught three passes for 82 yards. He scored one touchdown rushing and another receiving, and also threw a touchdown pass.

Almost all of it was done with that broken finger, which forced him to wear a protective wrap and adjust the way he carried and caught the football. He suffered the injury on Sept. 13. It wasn’t until the very end of the season that he was fully healed.

“The one thing it affected was when I switched the ball. I couldn’t really do that. So I had to be an athlete about it and tuck the ball and hold it tight so they wouldn’t strip it out,” Phillips said. “Catching the ball, I had a little bubble wrap. In the game, I don’t really think about it. I just do it.”

Vicksburg coach Tim Hughes said the injury did change the way Phillips was used in the offense. He caught 27 passes for 448 yards last season, and only 20 for 162 yards this year. He expressed amazement, though, at how Phillips’ production and drive didn’t slip at all despite the injury.

“It was a bone out of joint. It was something that’s always going to be moving and bending and whatever. He had to have it immobilized as he played,” Hughes said. “When you’re toting the ball that says even more about what you’re doing. He didn’t shy away from doing what he had to do with it.”

Phillips didn’t shy away from another role, either — that of being a team leader.

Phillips played four games at running back in 2018 as an injury fill-in. He was the only player on the 2019 roster who had a rushing attempt in 2018.

He had 149 carries this season, 108 more than in 2018. He carried the workload, as well as the weight of being a focal point of the offense, like a champ, Hughes said.

When the dust settled, Phillips wound up with 1,231 rushing yards and 10 touchdowns. He became the Gators’ first 1,000-yard rusher since 2011. He was proud of his consistency and production, but even more with the way the season unfolded.

It was not a great year for the Gators. They lost seven consecutive games, missed the playoffs, and finished 3-8. They didn’t give up, though, and finished the season with back-to-back wins over Callaway and Holmes County Central. They were in position to beat Canton as well, but gave up a touchdown in the final minute of a 37-33 loss.

Phillips said that when he remembers this season, that will be what he smiles about most.