Big plays, leadership made Sims the Defensive Player of the Year 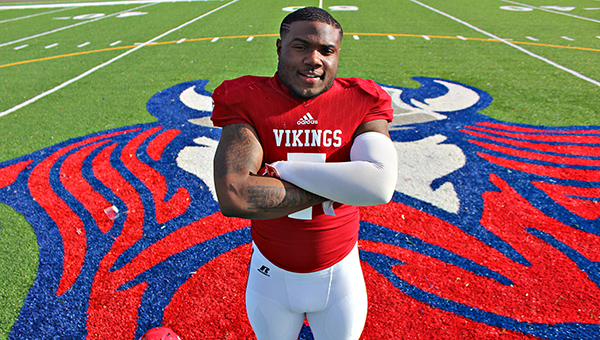 Warren Central linebacker Malik Sims is the 2019 Vicksburg Post Defensive Player of the Year. Sims had 82 tackles and 10 tackles for loss for the Vikings. (Ernest Bowker/The Vicksburg Post)

There are plenty of measurable categories on Warren Central’s defensive stat sheet, such as tackles, interceptions and sacks. There’s another one that’s unofficial, but no less important.

Head coach Josh Morgan calls them “wow plays.” They’re the ones that catch the eye with their athleticism, shift momentum with their impact, and bring the crowd to its feet with their intensity.

Although they’re hard to quantify, there is no doubt who led the Vikings this season in wow plays — Malik Sims.

“He always had a knack for the ‘wow play.’ His first game against Madison Central, he picked up a fumble and scored,” Morgan said. “He’s a game-changer. You know when Malik is tackling them. It just sounds different.”

The senior linebacker ranked second on the team with 82 tackles, but was a leader and a difference-maker on defense. Whether it was a big hit or a sure stop, he was often in the right position to make a play. He also contributed on special teams and on offense, and was such a key piece to the Vikings’ success that he was an easy choice as the 2019 Vicksburg Post Defensive Player of the Year.

“It means a lot. All I can do is thank God. I couldn’t believe it myself, so I want to thank my coaches, players, for believing in me this year,” Sims said. “I said this year I was going to do good. It’s my last year wearing a Viking jersey and I’m fixing to go out here and turn up.”

Sims’ signature play — and the one he considers his personal favorite — came in a 50-24 loss to Starkville in early November.

Warren Central had just taken a 7-6 lead on a long touchdown pass late in the first quarter, and on the next series Starkville quarterback Luke Altmyer threw a swing pass to his running back. Sims saw the ball floating in the air, lined himself up, and blasted his opponent just as the ball arrived to break up the play.

An already fired-up crowd was whipped up into a frenzy. Starkville had controlled the game to that point, but the momentum shifted and the hit propelled the Vikings to a 17-6 halftime lead.

Sims laughed again when he recalled that he used to hate having to make that kind of play. When he was a kid playing with the Vicksburg Packers youth team, he didn’t like the physicality of football.

“I played with the Packers, and coach (Darnell Davis) made me become a man,” Sims said. “I didn’t like to hit. He made me hit when I was 6 years old. He used to yell at me, holler at me, get on me. I was like forget this, I’m fixing to just start hitting.”

Sims eventually became not just a hitter, but one of the best linebackers around. He moved into Warren Central’s starting lineup as a sophomore in 2017. He was third on the team with 72 tackles, including eight for loss, that season. Last year he was second, with 76 tackles, and this season he upped his total to 82.

Sims’ contributions only start with tackling, though. He blocked a field goal this season, played on special teams, had an interception in a playoff game against Oxford, and was part of an effective running back committee.

On offense, Sims finished with 145 rushing yards and three touchdowns on 30 carries. He was one of six Warren Central backs with at least 100 yards for the season.

“He’s another guy that, whatever we needed, he was ready. Whether it was protection on the punt team or running the ball, he just wanted to win,” Morgan said. “We knew what he could do and could count on him. He’s always been dependable.”

Sims’ contributions were similar to one of his former teammates, 2018 Defensive Player of the Year Lamar Gray. Gray also was a contributor in all three phases of the game, and Sims said the similarities between them was not a coincidence.

“I was going to do anything for this team to win. When I saw Lamar get it, I was like, ‘Yeah, it’s time for me to step it up my senior year,’” Sims said.

Sims didn’t really have a choice but to step up this season. He was one of only four returning starters from last season, and the only one on defense. Warren Central regularly rotates enough players in and out on defense that he wasn’t the only one with experience, but he definitely was the veteran leader his teammates looked toward to make plays.

“When I saw them looking up toward me, I was shocked. It was time for me to step up and be a leader. Last year I was looking up to Lamar (Gray) and all of those boys. This year was my year, so I’m fixing to step it up and the ninth- and 10th-graders are looking up to me,” Sims said. “I’m proud of myself. I really stepped up this year.

Morgan was proud, as well. The way Sims anchored the defense, he said, was definitely worthy of another wow play.

“They knew he has the capability of making big plays. They also know how hard he works,” Morgan said. “Our better players have been our better leaders, and he’s definitely part of that.”