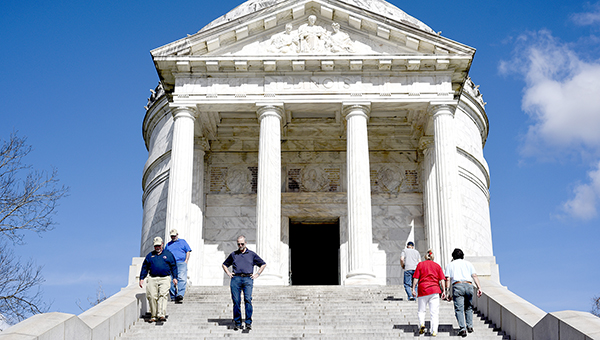 Visitors to the Vicksburg National Military Park walk on the steps of the Illinois Monument. (Courtland Wells/Vicksburg Post)

The Friends of the Vicksburg National Military Park and Campaign are getting help with a grant from the city of Vicksburg.

The Board of Mayor and Aldermen Monday approved giving the organization $35,000 to serve as a match for a $150,000 American Battlefield Protection Program grant to help expand the visitor experience to the Vicksburg National Military Park.

The grant, Friends executive director Bess Averett said, will help with developing programs to incorporate elements of the Port Gibson, Raymond and Champion Hill battlefield areas with the Military Park to help visitors better understand events leading to the Siege of Vicksburg.

“The grant provides seed funds to start with planning to expand the (military) park (experience),” she said.

Averett said the Friends and park officials are considering potential ideas for the eventual park visitor experience, adding, “It’s too early to tell,” what will be featured at each location.

“The park will go through a very public and extensive planning process to decide what each location needs and our role is to assist and speed up the planning so we can get those tourists to those sites even faster and encourage the visitors to stay longer,” she said.

The Vicksburg National Military Park has already expanded into one area tied to Union Gen. Ulysses Grant’s Vicksburg Campaign with the donation in July of 800 acres of state-owned land that is part of the Champion Hill battle site to the park.

The donation marked the largest expansion of the Vicksburg National Military Park in its history, according to National Park Service.

In July, the Friends of the Vicksburg National Military Park and Campaign announced a campaign to raise $3 million to support improvements to that section of the Champion Hill Battlefield site property.

Some of that money, Averett said, is being used now to improve access and interpretation at the newly acquired land, “With page pullouts and a trail system and informational signs — just entry-level access and basic interpretation.”