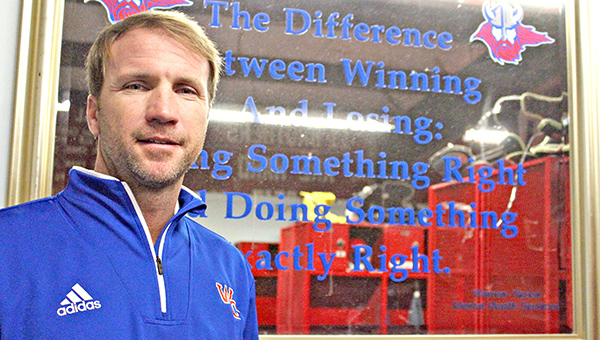 COACH OF THE YEAR: Warren Central’s Josh Morgan is the 2019 Vicksburg Post football Coach of the Year. It’s the fifth time in 10 seasons that he has won the award. (Ernest Bowker/The Vicksburg Post)

On paper, Warren Central’s season did not look all that impressive.

The Vikings finished 6-6 and lost in the first round of the Class 6A playoffs. The defense was good but not great, and the offense averaged a modest 270.1 yards per game. The program has certainly had better seasons in recent years.

In those modest accomplishments, however, are often hidden some of the greatest. The Vikings faced six teams that were ranked in the top five of the Associated Press Class 6A poll when they played them, all while rebuilding a lineup that had 18 new starters in Week 1. They overcame all of that to reach the playoffs for the eighth year in a row — the fourth-longest active streak in Class 6A — and put together a season that maintained the program’s increasingly high standards.

In the end, it was indeed an impressive season that made head coach Josh Morgan The Vicksburg Post’s football Coach of the Year.

“When you step back and look at the year, I’m really proud of the year we had,” Morgan said. “We faced a lot of adversity in different forms. I’m proud of the guys and the coaches, and the culture we have here and watching them grow. They’re coachable and fun to be around. It makes coming to work fun.”

The sheer number of new starters and a brutal schedule made for some uncertainty entering the year. Things didn’t get any easier as it unfolded.

The presumed starting quarterback, Eli Anderson, transferred to Neshoba Central when his father Brian Anderson took the job as that school’s offensive coordinator. Backup Shane Lewis gave up football to focus on baseball, a sport which he signed to play for Mississippi State.

Starting running back Jerrious Stovall, who figured to be the focal point of the offense as one of the few returning starters, was injured in September and eventually left the team.

On top of that, the Vikings had to navigate a schedule that included Class 6A powers Brandon, Pearl, Madison Central, Starkville and South Panola. They faced eventual state champion Oxford in the first round of the playoffs. All six of those teams spent large parts of the season ranked in the top five in Class 6A, and three of them were ranked either first or second at some point.

There were some ups and downs, but as usual Morgan and his coaching staff got the most out of what they had to work with. Quarterback Parker Kivett completed 60.7 percent of his passes for 1,637 yards. They compensated for the lack of a true lead running back with an effective committee approach. Six players, four of them sophomores or juniors, wound up with at least 100 rushing yards by season’s end.

The defense allowed 20.4 points per game, but averaged one takeaway and one sack. On special teams, the Vikings blocked three punts and two field goals, and kicker Josh Griffin tied a school record with 12 field goals.

“We were starting off real green. They had a small senior class, so we just grew together. We had a few seniors, but they did a real good job with the quality if not the quantity,” Morgan said. WC only had 15 seniors on the roster. “We started as infants. We did a heckuva job. It was a great journey, we competed at the highest level, and we saw it through to the end. It was really fun to be a part of that growth. We watched boys become men.”

Now having completed a decade at Warren Central, Morgan is joining some impressive company in Warren County football history.

His 66 wins rank seventh all-time among the county’s coaches, and he could move into fifth place by the end of next season. Erwin Baylot, who won 70 games at Culkin School and Porter’s Chapel Academy, is next up. Joe Edwards is after that, with 76 wins at St. Aloysius from 1978-87.

Morgan has won five Vicksburg Post Coach of the Year awards in his 10 seasons. Only his father Robert Morgan, who won it 10 times in nearly 20 years as Warren Central’s coach, won it more often.

Morgan shrugs some of that off. While proud of his accomplishments, he said he’s usually too focused on the next challenge to dwell on them.

“What we try to do is create a family atmosphere and a program that the community can get behind, and that young men enjoy being a part of. We try to carry on the tradition that’s been established,” Morgan said. “My head’s always down looking to get better. Truly trying to take advantage of every day and make the kids and the program better.”

Of all the things the Vikings have done on his watch, Morgan seems most proud of the eight-year playoff streak. The team went 3-19 in his first two seasons, and has not missed the playoffs or had a losing record since. They’ve won nearly two-thirds of their games since 2012.

Only South Panola (18 years), Petal (12) and Brandon (10) have longer active playoff streaks than Warren Central. Other than South Panola, Warren Central’s streak is also the longest in the highly-competitive Region 2-6A. South Panola made 17 of its appearances while in Region 1-6A,  and then moved into Region 2-6A this season.

“That’s an impressive number,” Morgan said. “Realistic goals change each year. But to be consistently relevant shows you people have a hold on it from the junior high on up. I’m proud of that.”