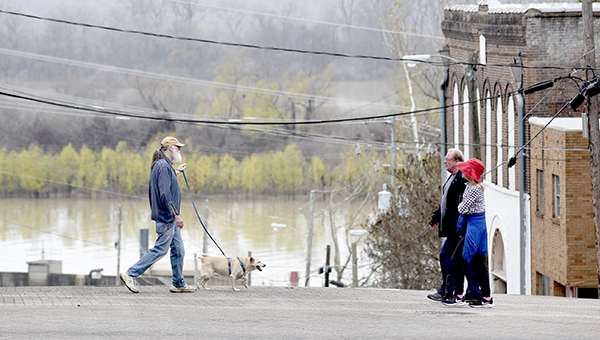 Pedestrians use the crosswalk at the intersection of Clay and Washington Streets. (Courtland Wells/The Vicksburg Post)

A splash pad once talked about for the community garden in the South Ward has been shelved under an amended request by the city for $500,000 in state bond money.

The Board of Mayor and Aldermen in November passed a resolution asking the state Department of Finance to issue the bond money, which was set aside by the Legislature for the city’s tourism projects. The splash pad for the community garden at the Vicksburg Municipal Airport was included in that request.

The splash pad was not included in the amended request the board approved Monday and was replaced by a project to refurbish downtown pedestrian crosswalks.

“We’re trying to make sure we get the downtown area in good shape for tourism,” South Ward Alderman Alex Monsour said after the Monday meeting. He said the splash pad might be built if there is sufficient bond money remaining after the other projects are completed. “We’ll just have to wait,” he said.

The other projects included in the original resolution — renovations to the downtown parking garages and the civil rights park at the Kuhn Memorial Hospital site — remain. At a meeting on Dec. 12, the board declared an emergency to fix problems at the north parking garage across Mulberry Street from Margaritaville Resort.

Mayor George Flaggs Jr. mentioned another project, the installation of a “vision board” for Washington Street Park in the downtown area. The board is a large video screen that would allow the city to show movies, sports and other events.

“We think that will help tourism, also,” he said. “We’re looking at that. We need some visual aids and other amenities for the city.”