Construction and title chases lead the sports stories of 2019 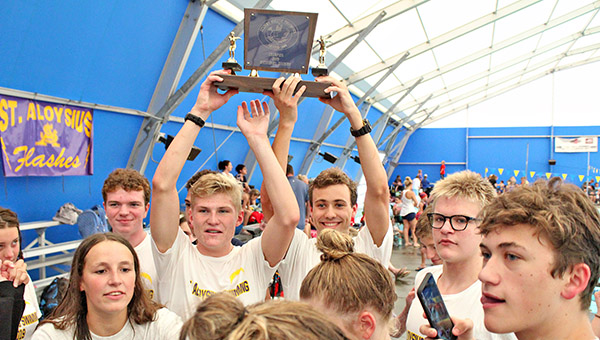 St. Aloysius seniors Adam Eckstein and Tommy Martin hold up the trophy after the Flashes won the team title at the MAIS Overall State Swim Meet in September. It’s the first state championship for St. Al since it joined the MAIS In 2015, and also the first time in the meet’s 46-year history that a team other than Jackson Prep has won. (Ernest Bowker/The Vicksburg Post)

The sound of sports in Warren County in 2019 was not the roar of a crowd or the crack of a bat, but rather the low rumble of diesel engines and the rat-a-tat-tat of jackhammers.

After years of debate, plans, and false starts, Vicksburg’s new sports complex finally opened in March. At the same time, work was beginning all across the Vicksburg Warren School District to renovate — among many other things — its athletic facilities.

The two projects touched nearly every facet of sports in Warren County in some way this year, and was an easy choice for the local sports story of the year.

As the year went on most of the city’s youth leagues, including the Vicksburg Soccer Organization and YMCA football, migrated out there to take advantage of the artificial turf fields.

The new complex also led to the re-purposing of existing facilities. The Warren County Board of Supervisors struck a deal with the Vicksburg Warren Athletic Association to allow the latter to clean up the old Culkin Complex for use as a practice facility. Halls Ferry Park became the home base for the Vicksburg Girls Softball Association, its tennis courts got an upgrade and a new clubhouse, and a disc golf course was added.

At the same time, the VWSD construction contributed to the popularity of Sports Force Parks. Softball teams from Vicksburg High and Warren Central were displaced and used the new complex as their home fields. St. Aloysius and Porter’s Chapel also used it as their base of operations.

Among the VWSD projects was the addition of artificial turf to Warren Central’s Viking Stadium and Vicksburg High’s Memorial Stadium. Like the sports complex, it had been discussed for years and finally became reality in 2019.

Those projects continued through the summer and forced VHS’ football team to bus players to and from practice at other venues. The renovation of Vicksburg’s baseball practice field into a game-ready one took away most of the adjacent football practice field.

“You want it to be nice and clean, and not have it as a distraction when you’re trying to develop and build. That will be great. But the truth is, sometimes you have to stop and make sure you’re enjoying the journey. This is part of it,” Vicksburg football coach Tim Hughes said this summer.

The baseball and softball fields at Warren Central and Vicksburg are scheduled to be ready in time for the spring 2020 season, but more work on other venues continues.

Phase two of the football stadium renovations were getting under way in late December. The concrete visitors’ bleachers at Memorial Stadium are in the process of being destroyed and rebuilt, and Warren Central’s football fieldhouse was scheduled to undergo major renovations starting last week. Both projects are scheduled to be completed this summer, just before the 2020 football season.

Construction on the high school buildings, meanwhile, has forced fans to have long walks to reach the basketball gyms located in their interior. Last week, the annual Red Carpet Bowl Classic scheduled for Jan. 18, 2020, was canceled for this season because of logistical concerns related to the construction.

While the overhaul of the city’s sports venues was the most visible and overarching story of the year, it wasn’t the only noteworthy one. Here is the rest of the top five:

St. Aloysius’ swim team had been knocking on the door of the MAIS championship since joining the association in 2015, but had been unable to break the 45-year reign of Jackson Prep — until this year.

At the state meet Sept. 18 in Flowood, the Flashes became the first school other than Jackson Prep to win the team championship since swimming became a sanctioned sport in 1973. St. Al’s swimmers won 15 individual championships and totaled 286 points, ahead of Prep’s 266.

St. Al’s swimmers erupted in celebration when, for the first time ever, Jackson Prep’s name was announced as the state runner-up.

“It was unbelievable. We’ve been trying so hard and waiting so long. I can’t really believe that we actually did it. Prep hasn’t lost since the MAIS has been in existence, so it was great to punch one through,” St. Al senior Adam Eckstein, who won the state title in the 50-yard backstroke as well as two relays, said at the state meet. “We get to be in the record books now as champions, and not just the boys (champions). We get to win.”

Conner Douglas spent seven years turning Warren Central’s baseball program into a perennial winner and spearheading an overhaul of its facilities, but his tenure came to an end in May when his contract was not renewed for the 2019-20 school year.

Douglas had a 142-66 record and led the Vikings to the playoffs every year he was coach. They won 20 games or more three times in his last four seasons, and he was The Vicksburg Post’s Coach of the Year five times from 2014-19.

Douglas spent three years as an assistant at Warren Central before taking over as head coach.

“It’s hard to fathom going somewhere else every day. Every day a 1 o’clock my truck has come to this parking lot for 10 years. Every day I’ve stayed in Vicksburg, this has been home and I’ve been welcomed by this community,” Douglas said in May. “It’s a lot of change and change is scary, but sometimes it’s a good thing. My family is looking to the next chapter. I’m not going to have any hard feelings.”

Douglas didn’t have a hard time finding a new job, either. A week after he was informed that he would not be retained at Warren Central, Douglas was hired as the head coach at Class 5A Long Beach.

Randy Broome, who previously served as Warren Central’s head coach from 2002-08 and had been on the baseball staff as an assistant since 2014, was hired as Douglas’ successor.

St. Aloysius’ swim team wasn’t the only one at the school to win a championship this year. The boys’ soccer team completed an impressive run to the MAIS Division III title by beating Heritage Academy 2-0 in the championship game on Feb. 23.

St. Al (17-1-1) went undefeated in its last 17 games and did not lose after falling at Division I finalist Jackson Academy in the first week of the season. It claimed its second state championship in a row. In three playoff games, the Flashes only allowed one goal.

“No team deserves it more than we do. We put in the time and had a lot of stuff going on, too. It’s been a journey, and I’m just glad it ends with back-to-back,” Ryan Theriot, a senior striker who finished the 2018-19 season with 55 goals and had 104 over the two championship seasons, said after the championship game in February. He was The Vicksburg Post’s 2019 soccer Player of the Year. “This is the best way to top it off. You can’t top it off better than this.”

Porter’s Chapel Academy’s softball team completed the best season in school history by coming within one game of a state championship.

The Lady Eagles finished with a 24-10 record, and won the District 5-2A and South State titles before losing in three games to Glenbrook in the MAIS Class 2A championship series. Their best previous finish in the state tournament was third place in 2004 and 2005.

In the championship series, PCA lost the first game 11-1 and then bounced back to beat Glenbrook 2-1 in Game 2. Glenbrook then won the decisive Game 3 by a score of 3-0.