Ford to again push for more transparency from state agencies 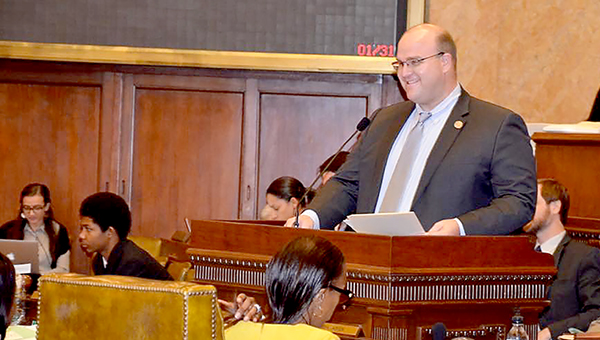 Editor’s note: This is the second in a series of articles with local lawmakers discussing their priorities heading into the regular session of the Mississippi Legislature.

Ford begins his first full term as District 54 representative. He was elected in 2017 to fill the unexpired term of Alex Monsour, who resigned the House seat after he was elected South Ward Alderman for the city of Vicksburg.

One of the bills Ford authored during his first two years in office was House Bill 1290, requiring state agencies to explain in writing the reason they were implementing a particular regulation.

The bill, which required agencies to answer a series of questions about the proposed regulations, passed the House but died on the Senate. He plans to re-introduce it when the Legislature goes into session Jan. 7.

“(It’s) 10 simple questions about what they decided to do to force this regulation on the public,” he said. “The simple way is — the hair salon people, if they come out and say, ‘X,Y,Z has to happen before you get a license,’ then explain why.

“Every agency knows the questions are there, they just have to put their answers in writing before they do it.”

Ford said the bill seeks to reduce unnecessary regulations, and “there’s nothing more terrifying than having to say why you’re doing something before you do it, and then it’s always on the record that this is the reason why you did it so you can’t change it later.”

Ford also plans to work with Commissioner of Agriculture Andy Gibson, who is preparing a farm bill that will help provide relief to Delta farmers affected by the 2019 flood and the increase in tariffs on soybeans.

Two other items on Ford’s agenda include changing the state’s Tax Free Weekend to the third of the month to allow more people to participate and upgrading the state’s foster care system.

Ford begins his first full term in the House as the state begins a new decade with a new administration at the State Capitol. He said the House leadership has held summits on workforce development and the brain drain — the loss of the state’s college graduates and others leaving the state for jobs.

“I fully anticipate we will go full steam ahead in passing some initiatives that will help us secure professional jobs and help keep our children in Mississippi,” he said. “We have many new Fortune 500 companies locating to Mississippi, including one that landed right here in Warren County — Land O’Lakes.

“We desperately need to help secure jobs for all Mississippians. I will fully support the speaker and his initiatives to move workforce development bills through the House.”

He believes the state should be able to adequately fund education.

“The rainy day fund has been fully funded which will afford us the opportunity to address issues related to education and infrastructure,” Ford said.

“All parties agree that we need to continue to find solutions for education funding and continue economic growth for Mississippi. The fundamental basis of education rests on reading. You can see results statewide since we have focused in on early childhood reading,” he said.

He said the infrastructure bill the Legislature passed during the special session will generate $1 billion for infrastructure with the lottery being the source of that funding.

“The Local System Bridge Program is a very effective program and we need to make sure it is operating at its maximum,” he said.

Lt. Gov. Delbert Hosemann in November said he will push for a local option gasoline tax, where voters would be allowed through a referendum to approve a local gasoline tax for county infrastructure projects. Ford said he has not seen the proposal and wants more information on the plan.

Hosemann’s plan is not the only special referendum Ford and the rest of the county’s delegation may have to review.

Mayor George Flaggs Jr. has said he will go to the Legislature seeking a local and private bill for a referendum to levy a 1-cent sales tax for capital improvements, which would include money for a new port.