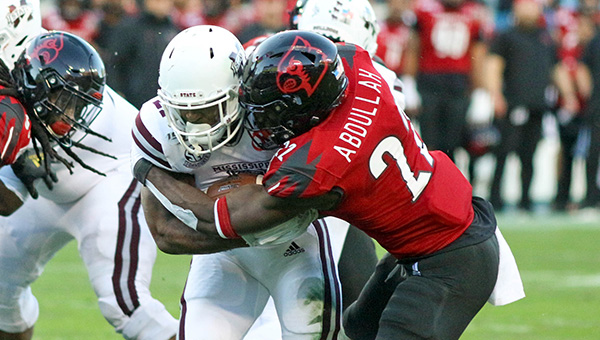 Mississippi State running back Nick Gibson fights through the tackle of Louisville linebacker Yasir Abdullah (22) to score a touchdown in the first half of the Music City Bowl Monday in Nashville. Louisville beat the Bulldogs 38-28. (Walter Frazier/For The Vicksburg Post)

The Cardinals (8-5) rallied from a 14-point deficit by scoring 31 straight to finish their big turnaround from 2-10 last season. Louisville also finally beat Mississippi State on the field for the first time in six tries, though the series now is tied 3-3 thanks to a pair of forfeits by the Bulldogs in the 1970s.

“We got down 14 points early in the game, and the kids didn’t flinch,” Satterfield said. “I mean they kept playing, they kept battling. The next thing you know you’re right back in the game. We grabbed the momentum and poured it on.”

Mississippi State (6-7) had been trying to finish the season with a three-game winning streak for the first time since 2013 and only the third time since the end of World War II. Instead, the Bulldogs headed home having lost a bowl game in each of coach Joe Moorhead’s two seasons.

“This season was a book in and of itself,” Moorhead said. “Certainly 6-7 was not the outcome we desired. To get bowl eligible, win an Egg Bowl and have this opportunity to play in a bowl game to me is a credit to these seniors, a credit to these staff and credit to these leaders that we were able to battle through a lot of adversity this season.”

The Cardinals had four sacks and recovered two fumbles, one returned 31 yards for a touchdown by safety Khane Pass. Pass scored when he recovered the ball after Gary McCrae chopped it out of Stevens’ arms. That made it 24-14 with 2:51 left in the third quarter, and Louisville added another touchdown on an 8-yard pass from Cunningham to Marshon Ford before the Bulldogs finally responded.

“It popped right in my hands, a perfect bounce,” Pass said.

Javian Hawkins led Louisville with 105 yards rushing, and he ran for a TD late. The Cardinals outgained Mississippi State 510-366.

Louisville was poised to take control on its opening drive, going from its own 3-yard line down the field. Cunningham hit Dez Fitzpatrick on a 19-yard pass only to be stripped of the ball by linebacker Willie Gay Jr., with linebacker Tim Washington recovering for the Bulldogs just short of the end zone.

Gay finished with a game-high 11 tackles, and also the one forced fumble.

Junior running back Kylin Hill, the Southeastern Conference’s leading rusher with 1,347 yards, stuck around for this bowl despite his plans to enter the NFL draft. Hill came in needing 45 yards to break the Bulldogs’ single-season rushing record held by Anthony Dixon, but he finished with 3 yards on seven carries while being limited by an injury.

Hill announced in December that he was skipping his senior season to enter the NFL draft. He elected to play in the Bulldogs’ bowl game, but was injured on the first play of the game.

“Kylin practiced well, practiced hard, decided to play in the game, which meant a lot to him, meant a lot to this team and this university and certainly a base run play you’re not anticipating that happening, but he tried to fight through it,” Moorhead said. “That’s a credit to him and his toughness and what he thinks of his teammates, and it was good to see Nick and Lee Witherspoon pick up the slack, as well.”