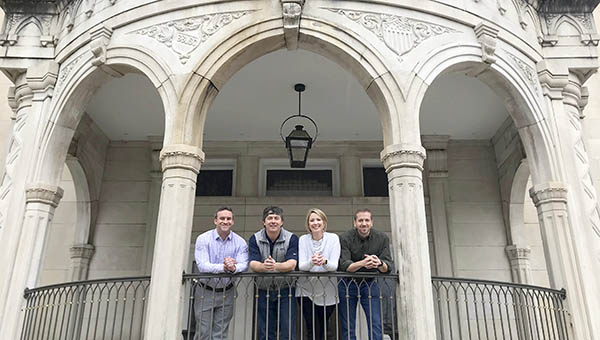 Derek Howard, Clint Walker, Ellen Amborn and Matthew Bell pose for photo outside of the B.B. Club. The Anthony has consolidated its operations into the iconic downtown building and has closed its service at the Vicksburg Country Club. (Courtland Wells/The Vicksburg Post)

A year ago, owners of The Anthony purchased the B’nai Brith Literary Club to expand their business. In October, they began serving lunch at the iconic downtown building as well as continuing their service at the Vicksburg Country Club.

Sunday marked the final day of operation for The Anthony at the country club and Thursday will mark a new start for the company operating exclusively out of the B.B. Club.

Bell, Howard and Walker, who all graduated from high school in Vicksburg, opened The Anthony at the Vicksburg Country Club in May 2017, and this past October, in addition to special events, The Anthony began serving lunch at the B. B. Club and this service will continue.

Bell said The Anthony will serve lunch Mondays through Fridays from 11 a.m. to 2 p.m. and that dinner services will not be offered.

“Our primary focus will be events,” Bell said, which includes weddings, receptions and private and corporate dinners.

And since most of these events are held at night, Bell said, it would not allow for dinner service.

Since opening in 2017, owners of The Anthony had a lease agreement with the country club, but now seemed to be the right time to transition to a facility they own, Bell said, adding the trio have been working with the club on the move.

“The club’s intent is to continue to serve food to our members, but upstairs will not be open to the public,” he said.

However, Oaks said, the board is in talks with another “entity,” who is looking at coming in to take over the public restaurant portion of the club.

“We hope to be able to make an announcement by the end of January,” Oaks said. “I am very excited about the prospect that we have been speaking with.”

For the civic clubs who meet at the country club for their weekly meetings, Oaks said food service will also continue for these groups.

The Anthony Downtown will officially open Thursday and Bell said to expect new items on the menu.