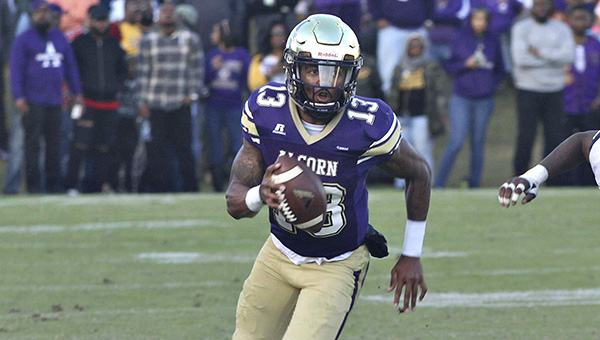 Alcorn State quarterback Noah Johnson (13) announced Monday that he plans to seek a medical hardship waiver for a sixth season of eligibility and then enter the NCAA’s transfer portal. Johnson was the 2018 SWAC Offensive Player of the Year, but suffered a season-ending shoulder injury early in the 2019 season. (Courtland Wells/The Vicksburg Post)

Johnson suffered a season-ending shoulder injury in the third game of this season against McNeese State. His replacement, Felix Harper, went on to throw for 2,954 yards and 33 touchdowns, win the SWAC’s Offensive Player of the Year award, and lead the Braves to the conference championship.

Johnson, who was a redshirt senior this season, said in a statement on Twitter announcing his decision that he will seek a medical hardship waiver for a sixth year of eligibility. If the waiver is not granted by the NCAA then his college career will be over.

Harper has one more year of eligibility and now appears entrenched as Alcorn’s starter.
Johnson, a native of Tampa, Florida, was the SWAC’s top offensive player in 2018 when he led the Braves to the conference title. He threw for 2,207 yards and 15 touchdowns, and ran for 1,080 yards and 11 TDs that season.

“Suffering a season-ending injury early this year was by far one of the lowest points of my athletic career and has given me much time to reflect,” Johnson said in his statement. “After much prayer and discussions with my family, I’ve decided to seek a hardship waiver from the NCAA and have entered my name into the transfer portal to openly explore opportunities, pending approval. I’m forever thankful to my teammates, the Braves A Club members and the fans for their genuine support and encouragment during my time at Alcorn.”