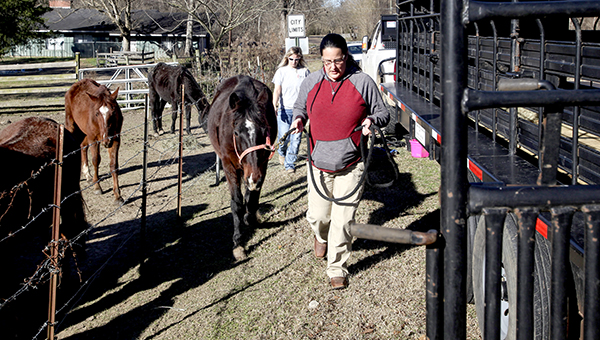 Vicksburg Animal Control Director Kacie Lindsey leads a horse from an enclosure on Standard Hill Road to a trailer in January. A total of nine malnourished horses were seized from the property. (Courtland Wells/The Vicksburg Post)

In January, the city of Vicksburg Animal Control seized nine malnourished and neglected horses on property on Standard Hill Road. Those horses seized included two foals, only about six months old. The most malnourished of the bunch was the nursing mother of one of the foals.

In The Post’s reporting, the owner of the horses lives in Chicago but had hired someone as the caretaker of the horses. That person either did not know how to care for the horses or simply did not care for them, Vicksburg Animal Control Director Kacie Lindsey said at the time.

Lindsey secured a seizure order under state law and is pressing charges against the caretaker, who she would not name.

This marked the second time animal control had been called to respond to the property. Lindsey seized a horse from the property in June 2018. That horse was so malnourished and injured, it eventually had to be euthanized.

The first horse seized, in addition to being malnourished, suffered from ligament and tendon injuries, as well as rope burns.