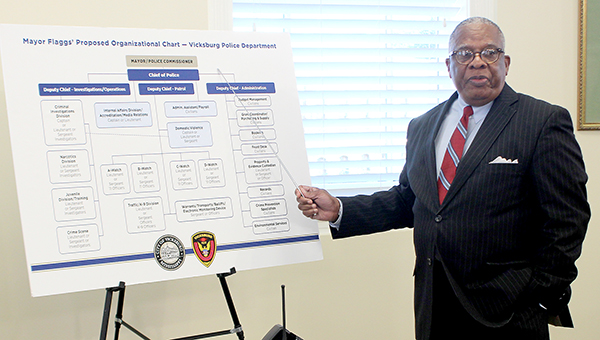 In October, the Board of Mayor and Aldermen approved the proposed reorganization of the Vicksburg Police Department proposed by Mayor George Flaggs Jr.

A major change in the reorganization plan was the elevation of the patrol division commander to deputy chief of patrol. That position was eventually filled by Capt. Penny Jones, who at the time had been patrol commander.

“I believe Chief [Milton] Moore is doing a great job,” Flaggs said, but, he added “If we don’t reduce crime and if we don’t make this more accessible to the public, and we don’t provide public safety, I’m telling you, this is the first step. The next step you don’t want. If this doesn’t work, then I’m going to get the personnel to make it work, if I have to go to China to get a police officer.”