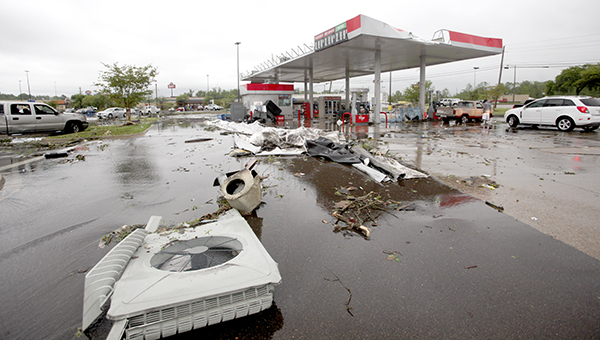 On Saturday, April 13 a line of severe weather raced through the Warren County area, bringing with it a number of tornadoes that caused damage across Vicksburg and Warren County.

The National Weather Service later confirmed three tornadoes touched down, with two of those tornadoes bearing winds in excess of 115 miles per hour.

The first cut a 4.35-mile path that started near Walmart, cut across Pemberton Square, before ending past Indiana Avenue near Highway 27. Winds topped out at 120 miles per hour, and the tornado had a width of more than four football fields.

A number of businesses along Pemberton Boulevard suffered severe damage, with some taking months to recover and rebuild.

The second reported tornado began at the intersection of Bowmar Avenue and Jeanette Street. The tornado, which had winds that hit 115 miles per hour, was reported to have been 175 yards wide and damaged an area nearly three miles in length.

The survey team said the tornado ended close to North Frontage Road and near Highway 61 and Clifton Drive.

The storm is credited with ripping the roof off of homes, snapping a number of hardwood trees, and causing a tree to fall on a home on Ken Karyl Avenue, before shifting northeast, where it caused significant tree damage in the Vicksburg National Military Park.

In their report, data showed the tornado, which started east of U.S. Highway 61 North on Sherman Avenue, ended nearly an hour later 20.37 miles away in Yazoo County. At its peak, the tornado reached winds of 115 miles per hour, which rated it as an EF2 tornado. The maximum width of the tornado appears to have been 700 yards, according to the National Weather Service’s survey team’s data.

In the report, the team said the storm snapped small hardwood trees on Sherman Avenue, before uprooting trees on the backside of River Region Medical Center.

Large trees were uprooted and fell on homes in the Openwood neighborhood.

On Henry Road and Tucker Road, east of Oak Ridge Road, several power poles were snapped at their base, where the survey team said the tornado appeared to be at its strongest.

The tornado then shifted toward northeast Warren County, uprooting and snapping trees. Several of which fell on power lines.

The data shows the storm then crossed into southern Yazoo County, where it snapped trees along Oak Grove Church Road.