Bulldogs put to bed a season with plenty of ups, downs and drama 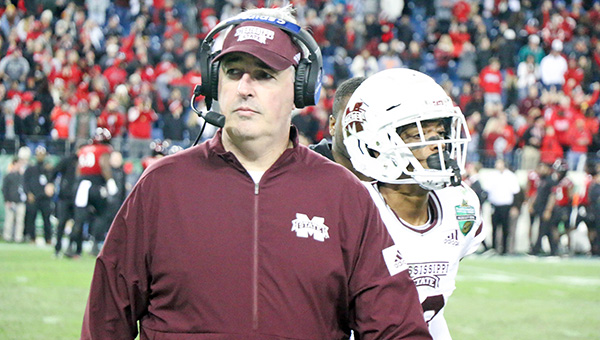 Mississippi State head coach Joe Moorhead walks toward the sideline during the Music City Bowl against Louisville on Monday. The Bulldogs lost 38-28 to finish the season with a 6-7 record. (Walter Frazier/For The Vicksburg Post)

As he wrapped up the final postgame press conference of the 2019 season, Mississippi State coach Joe Moorhead rattled off the list of accomplishments for the program over his two seasons.

Two Egg Bowl wins. Two bowl game appearances. Three top 25 recruiting classes.
It was the flip side of those same accomplishments, however, that have left fans growing restless with his tenure heading into 2020.

Two bowl game losses. A 7-9 overall record in the Southeastern Conference. Off the field issues that included an academic scandal and ensuing suspensions, and a fight in practice that left the starting quarterback injured and unable to play in the bowl game.

Moorhead has continued Mississippi State’s success — Monday’s 38-28 loss to Louisville in the Music City Bowl was the program’s 10th consecutive bowl appearance — but it’s also clear the Bulldogs still have a lot of work to do.

“We’ve just got to stay the course and keep working. Certainly ending the season with a loss in the bowl game is not ideal,” Moorhead said after Monday’s game in Nashville. “It’s trying to focus on the positives, sit down next week and evaluate every aspect of the program, see where we’re at, continue what we’re doing well, and looking to fix the things we need to do a little bit better and take — obviously not the positive momentum from this game but all the things we’ve done well the past few years and need to build off of that.”

Mississippi State went 8-5 in Moorhead’s first season, but finished 6-7 in 2019. The Bulldogs started the season 3-1, then lost four in a row all by double-digit margins. They rallied to win three of their last four games to become bowl-eligible.

Moorhead said a lot of factors went into the up-and-down season, such as injuries. Suspensions also played a key part.

Ten players, including defensive starters Willie Gay, Jr., Lee Autry and Marcus Murphy, were involved in an academic scandal where a tutor took tests and completed assignments for them in a chemistry class. They were all suspended for eight games, although not consecutively, leading to a different lineup from week to week.

Mississippi State ranked 12th in the SEC in scoring defense, and 11th in total defense.
Moorhead said the positive side of that situation was that a number of young players saw playing time this season.

“I think we had on the field today to start the game six of our 11 starters who started the first game didn’t play, and then I think almost a similar number maybe offensively. So throughout the season you saw a ton of young kids in there playing football, who were either first or second-year players and have done really, really well,” Moorhead said. “When you look at it positionally across the board, I think it’s going to bode very well for the future and you add that to what we’ve been doing from a recruiting standpoint, and you stand on the shoulders of those who have gone before you.”

The suspensions were only one of many off the field distractions for the Bulldogs this season.

Late in the regular season, Moorhead was rumored to be a candidate for potential job openings at Rutgers and Illinois. Fan discontent grew during the four-game losing streak in the middle of the season.

Tommy Stevens, a transfer from Penn State, never quite panned out as the starting quarterback because of a series of injuries.

True freshman quarterback Garrett Shrader started four games and showed promise as a dual threat — he passed for 1,170 yards and eight touchdowns, and was second on the team with 587 rushing yards and six TDs — but was sidelined for the bowl game after breaking his orbital bone in a post-practice fight with Gay last week.

When it was all said and done, however, Moorhead again tried to focus on the positives.
Shrader, the Bulldogs’ presumed quarterback of the future, got plenty of valuable playing time. Gay and Murphy will both be back in 2020 to lead the defense for a full season — and so, it appears, will Moorhead.

Whatever the future holds, Mississippi State did not make a change in Decemeber when most coaches are hired and fired. Moorhead pulled in a top 25 recruiting class in the early signing period.
And, with the tumultuous season in the rearview mirror, there’s an idea that the Bulldogs might be able to take a step forward.

“You know, all football coaches sometimes at the end of your career you think you’re going to write a book and talk about a season, talk about your career and each season is a chapter, and this season was a book in and of itself, and certainly 6-7 was not the outcome we desired,” Moorhead said. “To get bowl eligible, to win an Egg Bowl and have this opportunity to play in a bowl game, to me is a credit to these seniors, a credit to this staff, a credit to these leaders that we were able to battle through a ton of adversity this season.”