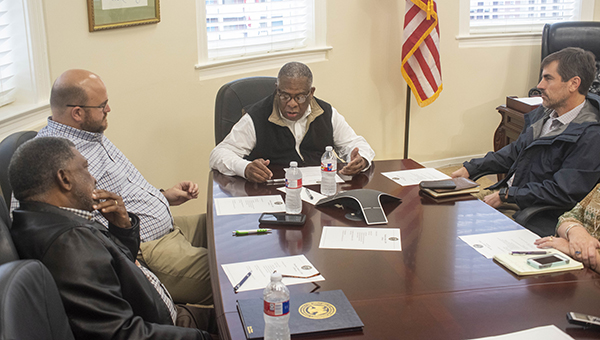 Mayor George Flaggs Jr. Thursday took his proposal for a public referendum for a 1 percent sales tax on retail goods for capital improvement projects to members of the county’s legislative delegation.

The sales tax was one of four items the mayor discussed with State Reps. Oscar Denton and Kevin Ford and State Sen. Briggs Hopson

He also discussed possible special local bills for dealing with vacant commercial buildings, electric scooters and a bill that would allow the city to sign a long-term lease for space at the Mississippi Center for Technology and Innovation planned for the old Mississippi Hardware building.

In April 2018 Flaggs proposed the 1 percent sales tax to fund a $55 million, 15-year bond issue that includes $28.5 million for a new port for Vicksburg and $26.5 million for public works, paving, a new fire station, improvements to the Vicksburg riverfront and projects to boost tourism.

City attorney Nancy Thomas said the city is asking for two dates for the referendum to provide for a second election if the first fails.

Local and Private Committee chairmen in the past have been reluctant to approve local tax referendums unless local officials unanimously support the project. Flaggs said he thinks there is support for local option tax plans in Jackson.

“I believe there is more appetite in the Legislature to allow local option (taxes) in certain areas for certain projects as long as there is a referendum for it and the people speak to it,” he said. “Your best opportunity to pass anything to do with having people vote is always your first year.

“The (legislative) leaders I’ve talked to understand that it’s more challenging for local government to operate under existing budgets as they have done in the past,” he said. “We could not have gotten the sports complex built without that referendum.”

Flaggs also pointed out the Mississippi Municipal League is studying proposed legislation allowing cities to hold local option referendums to add an additional 1 percent sales tax for projects without having to get a local and private, or special bill, passed to hold a tax election.

Hopson questioned whether such a bill would pass, pointing out cities will receive revenue from the use tax diversion approved by the Legislature in 2019. Flaggs, however, said the diversion funds applied only to infrastructure.

Concerning other proposed legislation, Thomas said the city is considering a vacant building ordinance authorizing the city to inspect, charge owners a fee and require owners to have insurance on the buildings.

“If we can’t do it under our police powers, we may need some legislative authority,” she said, adding other states have approved legislation allowing cities to crack down on vacant buildings.

The bill, she said, would also require owners to have a local contact in case there are problems with a building.

“We’re hoping the fee will motivate the owner to put the building to use,” Thomas said.

She said the city may need a local and private bill to have electric scooters in the city. The city has a contract with San Antonio, Texas-based Blue Duck Express to have a pilot program to provide alternate transportation in the downtown area.

The scooters, Thomas said, do not fit in any of the transportation definitions currently under state law.

City officials also asked for a special bill that would bind future administrations to the potential long-term contract if the city leases space in the Mississippi Center for Technology and Innovation. The bill would have a “repealer” that would repeal it once the lease expires.

The project is designed to provide space for high tech businesses working with the U.S. Army Engineer Research and Development Center.  The city has committed $300,000 toward the project, which has also received state funding.

In other matters, Flaggs outlined his goals for 2020, which include reducing crime, better cooperation with the Warren County Board of Supervisors, getting a complete and accurate Census, increasing federal and state money coming to the city and creating more jobs.

Flaggs said early information from the Census indicated the state will lose population, but did not believe the loss will cost the state a congressional seat.

Having a population above 25,000 qualifies the city to receive federal funding as an urban area, he said.

“I look for the state to be very productive and very helpful to us,” Flaggs said. “The lieutenant governor (Delbert Hosemann) is from Vicksburg; I think that should help us some.”

Flaggs said he intends to work more with Vicksburg Warren Economic Development Foundation Executive Director Pablo Diaz, the Board of Supervisors and the Warren County Port Commission to bring more jobs to the area.