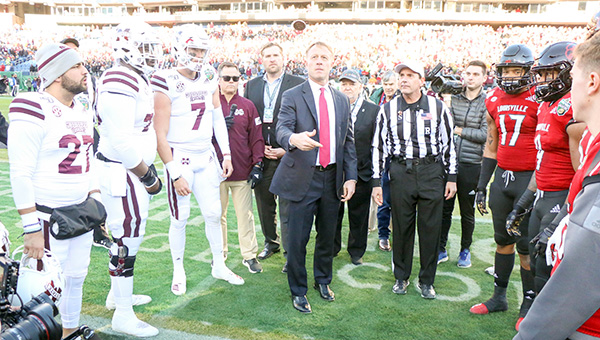 Mississippi State and Louisville players await the outcome of the coin toss before the Music City Bowl Monday in Nashville. (Walter Frazier/For The Vicksburg Post)

Like most sports fans, I’ve spent the past two weeks feasting on the relentless buffet of college football bowl games.

A Gasparilla Bowl here, a Camellia Bowl there. Give me some Orange and some Citrus, a Potato and a Peach, so our Celebration can have a little Sugar and turn into a full-fledged Fiesta. If we overdose on it all, don’t worry. We’ll find the Cure.

We’ll sit in the Sun and wonder how in the world Redbox is still profitable enough to sponsor a bowl game.

Give me Liberty or give me Independence — either way, we’ll remember the Alamo as we honor our Military, Armed Forces and First Responders.

Maybe we won’t go to Texas, New Mexico or Arizona, but we can dream of spending a Holiday in the Bahamas or Hawaii.

Or we can visit Music City and shop at Belk for a Cotton suit with Pinstripes. To get there, we can buy an RV from Camping World. Perhaps a road trip to Las Vegas or New Orleans might be more fun. Just make sure to get the oil changed at Quick Lane before we leave.

Sports writers love to make fun of the ridiculous sponsors for bowl games. But where would we be without the folks who pony up the cash to pay for the games?

Outback playing PlayStation while wondering when our monthly house payment to FBC Mortgage or Franklin American Mortgage is due, that’s where. Instead of taking a day off to watch our teams, we’d be at work so we could afford to gas up our Mitsubishi at Valero and pay the insurance bill from Allstate before we go buy something at Academy Sports + Outdoors or AutoZone.

There used to only be a handful of bowls back in the day, mostly on New Year’s Day. But this is a New Era, for sure. Now there are 41 of them spread from Dec. 21 to Jan. 6, with the national championship game a week later.

Some people pine for the old days, when a bowl invitation supposedly meant more and things weren’t as commercialized. Me? I savor the smorgasbord like a big bag of Chick-fil-A sandwiches, for the simple reason that I know we’re down to our last bites of football until September.

Sure, riding on a Bad Boy Mower during the hot summer months and thinking about next season can be fun, but it’s just not the same as being in the thick of things. That idea sure is a Capital One.

Football. As Tony the Tiger would say, it’s grrreeatt!