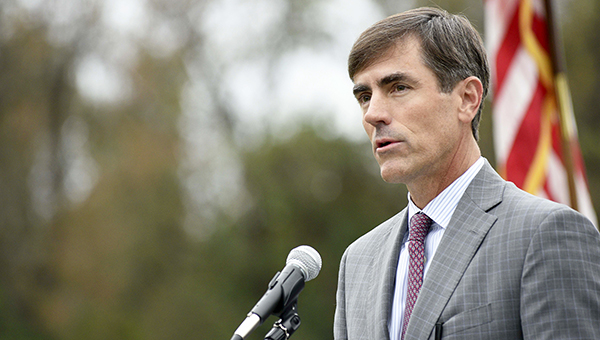 Editor’s note: This is the final part in a series of articles with local lawmakers discussing their priorities heading into the regular session of the Mississippi Legislature.

The state of Mississippi is getting new leadership in Jackson, and the key figures, Gov. Tate Reeves and Lt. Gov. Delbert Hosemann, are familiar to state Sen. Briggs Hopson.

“I know both of those gentlemen well and I’ve worked with Tate Reeves for the last eight years as he served as lieutenant governor,” Hopson, R-Vicksburg, said. “I’m excited about working with Delbert Hosemann; I know him as a longtime friend and someone who I’ve been around for many, many years.”

Hopson, who is beginning his third term in the state Senate, believes Reeves will focus on some of the issues as former Gov. Phil Bryant—economic development and workforce training.

And education, he said, will continue to be a major topic.

“I’ve been pleased to see that Mississippi has advanced dramatically nationally on education testing, and we’ve acquitted ourselves very nicely, but I think there’s more that we can continue to do to get better.”

Hopson did not know whether the Legislature will continue to fund schools under the Mississippi Adequate Education Program or consider another funding formula.

Hopson said he would like more focus on and the implementation of a bill he passed a few years ago involving distance learning to help school districts that can’t afford some of the programs and classes that more affluent county school systems have.

“We’ve got a bill in place to help schools collaborate to use teachers who may not be in their area; to use the internet and broadband technology to get students online to watch classes,” he said.

“It’s not an ideal solution, but it’s better than what we have in some areas, where they do not have access to qualified teachers in some areas of key upper-level high school courses.

“I want to try to push hard to implement that and work with industry and government to see if we can get broadband capability for rural areas so that will become something that’s a reality across the state.”

While there has been no mention of further state funding for roads and bridges during the coming session, Hosemann has promoted a plan to help county governments seek more infrastructure money with a local option fuel tax approved through a public referendum.

Hopson said the proposal is something “I really want to look at the details and talk to some people about it because that’s a new idea that’s been floated. I’m not saying I’m opposed to it, but I want more details before I commit on that one way or the other.”

He said he is considering several bills on local and state issues. One is legislation to provide further relief to people in his district affected by the 2019 flood. Hopson’s district includes Warren, Issaquena and Yazoo counties, which were seriously affected by flooding in the Yazoo Backwater Area.

Other bills include continuing the push for early education and mental health issues. Hopson said the state has to consider changes in mental health programs in the wake of a recent federal court ruling on the delivery of mental health care.

“We have to see what we can do to meet the needs of mental illness, and try to see if we can get more community-based programs where possible,” he said.