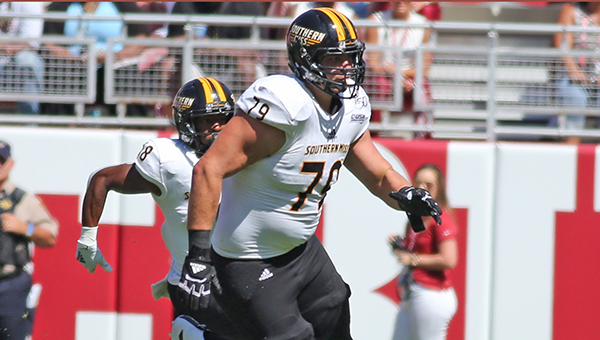 For more than a decade, DeMichael Harris and Drake Dorbeck have been football teammates.
Through junior high and then high school at St. Aloysius, and then in the college ranks at Southern Miss, the offensive lineman Dorbeck has cleared the way for the speedy running back Harris to rack up yards and touchdowns.

The journey that began in front of a few dozen family and friends on Grove Street in Vicksburg will end Saturday, on national television in Fort Worth, Texas. Harris and Dorbeck will play their final game together when they lead Southern Miss (7-5) against Tulane (6-6) in the Lockheed Martin Armed Forces Bowl.

“We’ve played a lot of ball together,” Dorbeck said after practice on Thursday. “It’s kind of bittersweet knowing it’s our last one together. It’s been fun blocking for him.”

Dorbeck and Harris were part of the best — and perhaps most talented — St. Aloysius team in decades as they led the Flashes to the 2014 MHSAA Class 1A championship game. Among their teammates were linemen Ben Brown and Josh Price, who are currently starters for Ole Miss and Southeast Missouri State, respectively.

Dorbeck signed with Southern Miss in 2015 and Harris, who graduated a year later, joined him in 2018 after two seasons at Hinds Community College. The two have been starters on USM’s offense the past two seasons, once again creating the kind of highlights they did during their early days in Vicksburg.

Harris had five plays of longer than 50 yards this season. On one of them, a 60-yard touchdown run in a 45-27 win over North Texas in October, it was Dorbeck who cleared out the final defender with a crushing block to spring him.

“It’s pretty cool. We started playing together in junior high, and seeing it come to its ultimate end is cool,” Harris said.

While intertwined, the college careers of the two players have also taken slightly different paths.

Dorbeck became a starter in his sophomore season and has been one of the most durable players on USM’s roster. The Armed Forces Bowl will be his 32nd consecutive start at either right or left tackle.

“It’s an honor being the best lineman anywhere,” Dorbeck said. “I’m humbled to receive this award. It’s rewarding for all of the hard work I put in.”

Harris, meanwhile, had a longer road to success. He led Hinds in all-purpose yardage twice, but struggled to break out at Southern Miss as a wide receiver in 2018. He played in all 11 games, and finished with just 27 receptions for 241 yards and two touchdowns.

Blessed with tremendous speed — he was the first and so far only high school athlete in Mississippi to run the 200-meter dash in under 21 seconds at a sanctioned track meet — Harris was moved to receiver in college despite being a dominant running back in high school. He ran for 3,649 yards and 47 touchdowns in less than two full seasons as St. Al’s starting running back, and was twice named The Vicksburg Post’s Offensive Player of the Year for Warren County.

“I’ve been all over the place, wherever my team needs me to be. I just looked at it as another job,” Harris said. “My body type is a question mark. They know I can play.”

This season, he was finally moved back to running back and thrived. He ranks second on the team in rushing with 541 yards — the leader, Kevin Perkins, has 548 — and five touchdowns. He has also caught 30 passes for 297 yards and three TDs, and returned a kickoff 100 yards for a touchdown against Louisiana Tech.

“It felt like I was home, like it was back in high school at St. Aloysius,” Harris said.

With one college game left to play, both Harris and Dorbeck said they’re trying to enjoy the present and not think about the end or the future. Both could get an opportunity in the NFL, either as late-round draft picks or free agents, but they said they haven’t heard a lot of chatter about their professional prospects yet.

“I’ve got mixed emotions. There’s a world of uncertainty Saturday after 1:30 about where I’ll be,” Dorbeck said. “I’m finishing out here and I’ll worry about that when it’s over.”

“I’m just looking at it as the next game, even though it’s the last game,” Harris said. “It hasn’t hit me yet. It’s going to hit me when the clock hits triple zeroes.”