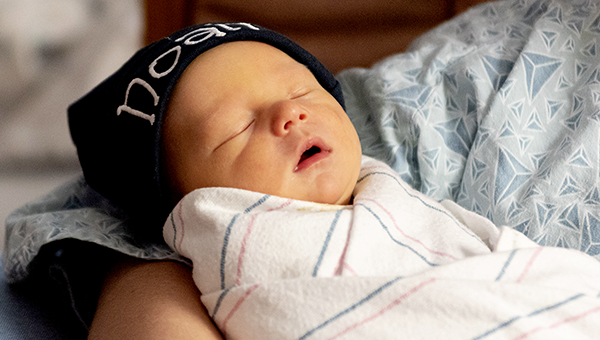 His due date wasn’t until much later in January, but baby Noah decided he wanted everyone to remember his birthday.

“I was not expecting this,” his mom, Heather, said as the family gathered in her room at Merit Health River Region.

This is Heather’s second child and the first for Noah’s father, Brandon.

“I felt a little light-headed after he was born,” Brandon said, but watching the new father hold his son, it was evident the light-headedness had passed. There was only calm and serenity as he gazed at his son.

Heather said she and Brandon had not made any special plans for New Year’s Eve which was fortunate since Heather started experiencing labor pains early the next morning.

After her water broke, the couple headed to the hospital at 7:30 a.m.

Brandon said he was a little “freaked out,” since they weren’t expecting Noah to arrive so soon, but all went well.

Weighing in at 5 pounds 13 ounces, and measuring 18 inches long, Noah is a little guy but was making a big impact on his cousin, Landyn.

“I enjoyed holding him,” Landyn said.

Clinton, Noah’s grandfather, said Noah had missed his birthday by just a day.

Asked if Noah’s birth had interrupted any of his New Year’s Day plans, one of the labor and delivery staff nurses, who had come by to see little Noah before he went home, said if he did he wasn’t held up long.

Although Heather said she did not have a chance to eat the traditional meal of black-eyed peas and cabbage for the New Year, it was obvious the young couple had already had a bit of good luck.