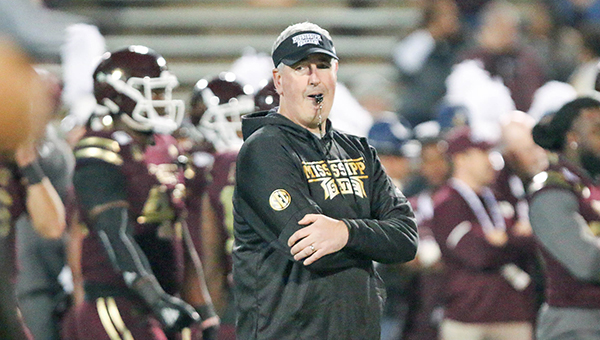 Mississippi State head coach Joe Moorhead watches his team go through warmups before the Egg Bowl against Ole Miss in November. According to several media reports, Moorhead was fired by Mississippi State on Friday. (Walter Frazier/For The Vicksburg Post)

Mississippi State might not have to drag Joe Moorhead’s Yankee butt out of Starkville, but it made clear on Friday that he’s no longer wanted there.

Mississippi State fired Moorhead on Friday morning to end his two-year tenure as the school’s football head coach. Media reports surfaced Friday morning, and the school made an official announcement just after 10 a.m. A press conference was scheduled for noon in Starkville.

“In consultation with President Mark Keenum and after a thorough review and evaluation of all aspects of our football program, I have decided that a change in leadership is in the best interest of our team and university,” Mississippi State athletic director John Cohen said in a statement announcing the decision. “I want to thank Coach Moorhead for the hard work he has done with our football program. I wish Joe and his family success in the future.”

Moorhead’s second season ended Monday with a 38-28 loss to Louisville in the Music City Bowl. Sports Illustrated reported that he has a $7 million buyout that could be as little as $4 million through offset language if he is hired somewhere else.

Moorhead was 14-12 as the Bulldogs’ coach, including a 6-7 record this season. Two bowl game losses and a slew of off the field issues led to growing fan discontent, and chatter picked up considerably this week that his job might be in jeopardy.

Just before the start of this season, 10 players — including three defensive starters — were suspended for as many as eight games each for their roles in an academic scandal in which a tutor completed coursework and tests for them.

Last week, star linebacker Willie Gay, Jr. and freshman quarterback Garrett Shrader were involved in a fight following a bowl practice. Shrader, who started four games and led the team in passing, suffered a broken orbital bone. Instead of starting in the Music City Bowl, he did not play at all.

On the field, many fans grumbled that Moorhead’s teams underachieved. His first season ended with an 8-5 record despite having three first-round NFL draft picks on defense and Nick Fitzgerald, the Southeastern Conference’s all-time leading rusher among quarterbacks, running the offense.

This season included a four-game losing streak in which all of the losses were by double digits. The Bulldogs won three of their last four games to get to 6-6 and bowl eligibility.
Mississippi State was 7-9 in the SEC under Moorhead.

During his postgame press conference after the Bulldogs’ 21-20 win over Ole Miss in the Egg Bowl, Moorhead answered a question about his job security by proclaiming, “This is my team. This is my school. This is my program. You’ll have to drag my yankee ass out of here.”

“It is clear the time has come to change the leadership of our football program. Coach Moorhead is a good man, and I have nothing but respect for him. I sincerely wish the very best for him and his wonderful family,” MSU President Mark Keenum said in a statement. “Director of Athletics John Cohen will be working to find a new head football coach who will demonstrably reflect our shared expectations for a consistently competitive football team that displays discipline, pride, and preparation in all facets of the program.

Mississippi State will now search for its second coach in two years after the first wave of the 2019-20 hiring cycle has been completed.

Three SEC teams — Missouri, Arkansas and in-state rival Ole Miss — have already hired new coaches.
The coaching change should not have a negative effect on Mississippi State’s 2020 recruiting class. Moorhead’s staff signed 22 players during the early signing period in December, and only has a few spots left to fill.

“We look forward to finding an outstanding leader both on and off the field who connects with our Bulldog student-athletes, coaches and fans to the fullest,” Cohen said.