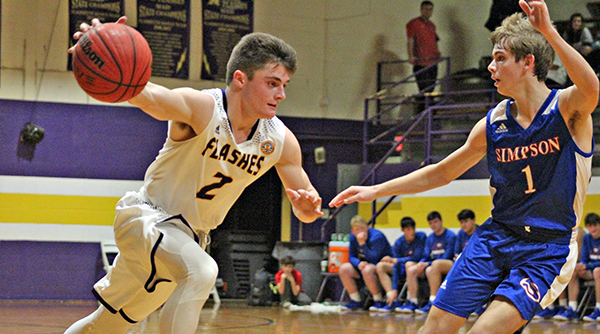 The flip of the calendar from 2019 to 2020 offered a fresh start for St. Aloysius’ struggling basketball teams.

Simpson Academy made sure the misery carried over to the New Year.

St. Al only made two field goals in the first quarter while digging a double-digit hole it never climbed out of. It trailed by 23 points at halftime and, despite some improvement in the third quarter, never got it under 20 points in the second half.

“Turnovers are killing us,” St. Al coach Eddie Pickle said. “When you try to dribble through a zone press, you’re going to do that. We got outrebounded. They beat us to every loose ball. We can’t make a free throw, can’t make a layup. We’re not playing real good basketball right now.”

Simpson stretched the lead to 34-11 by halftime. Larkin scored 10 of his 14 points in the first half.

Thursday’s game was the first of five in eight days for St. Al. It will host Clinton Christian on Saturday — the junior varsity begins at 1 p.m. and the varsity at 3 — and then play district games against Central Hinds (Monday), Hillcrest Christian (Tuesday) and Park Place Christian (Friday) next week.

It is a difficult stretch for any team, but especially one that has struggled like St. Al has so far this season.

“We’re not in real good shape because we didn’t get in the gym much over the holidays. We had one practice. We had one shoot-around and about half the kids showed up for that,” Pickle said. “The only thing we can do is play ourselves into shape. But when you make turnovers like we have, it’s kind of hard to let those kids stay on the court.”

St. Al (3-9, 0-3) only trailed by seven points after the first quarter, but was outscored 22-6 in the second and never got back in the game. It only scored four points in the third quarter and none in the fourth.

It was a disappointing outcome for the Lady Flashes after the split two games at the Madison-St. Joseph tournament last weekend.

“We made a couple of turnovers and it just snowballed. Simpson is good. They finished second overall last year. But I don’t think they should beat us by 48,” St. Al girls coach Mike Coleman said. “As good as we played against Greenville-St. Joe, we played just that bad tonight. And Simpson had a lot to do with that. They didn’t put a weak player on the floor.”