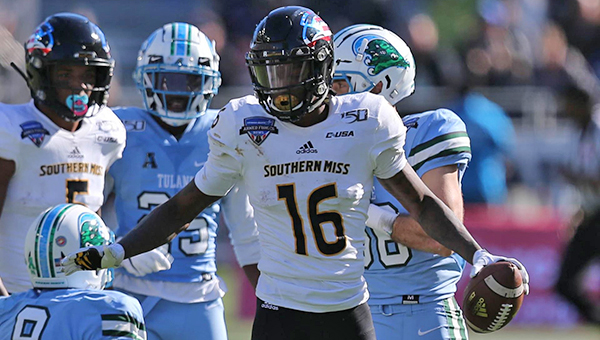 FORT WORTH, Texas (AP) — Justin McMillan won two Texas state championships playing for a high school only about 35 miles away from where he played his last game for Tulane. Both of his parents served in the Army.

The Armed Forces Bowl provided a storybook finish for his college career.

McMillan, who started for the Green Wave for two seasons after transferring from LSU, threw three touchdown passes in the third quarter as Tulane rallied for a 30-13 win while renewing a rivalry against Southern Miss on Saturday.

Tulane scored the last 30 points of the game — 24 of them in the third quarter — after Southern Miss jumped out to a 13-0 lead in the first quarter.

“It is a home game. I live right down the road,” said McMillan, who went to Cedar Hill High School. “It feels good to, one, play a game down here, two, to have two parents in the military. It’s literally a Cinderella story for me.”

The Golden Eagles (7-6) took a 13-0 lead after Jack Abraham threw a touchdown pass and ran for a score on their first two drives, but the quarterback took a hard shot on his last snap before halftime and didn’t play again. They also lost top running back De’Michael Harris to a hamstring injury in the first half.

Tulane tied the game at 13-all on its first possession after halftime, when McMillan threw a 52-yard TD pass to Jalen McCleskey.

“Obviously we didn’t play great in the first half. … Five weeks off, I think that hurt us a little bit,” coach Willie Fritz said. “It takes a while to get the rhythm back.”

The Green Wave certainly did after halftime, when Southern Miss struggled without two of its top offensive threats.

Harris, a former St. Aloysius star playing his final college game, caught four passes for 49 yards before leaving the game. He did not have a rushing attempt. He was the team’s second-leading rusher entering the game, and scored a team-high nine touchdowns this season.

“We really just had a disastrous third quarter any way you want to cut it,” Golden Eagles coach Jay Hopson said. “Tulane made plays offensively, they had some explosives, we had some mental errors. I think explosive plays kill you in football. I thought we played hard and I believe we competed to the very end. … Injuries are always a part of the game and it’s just next man up.”

McMillan had a high-stepping 18-yard run to set up Merek Glover’s third field goal, a tiebreaking 36-yarder, before TD passes to Jacob Robertson (7 yards) and a wide-open Amare Jones (20 yards) on the next two drives.

After only 22 yards passing at halftime, McMillan was 9-of-10 for 193 yards in the second half.

Abraham, only the third Golden Eagles quarterback with a 3,000-yard passing season, threw 44-yard touchdown pass to Quez Watkins and ran 3 yards for another score for the 13-0 lead.

But Abraham took a shot on a blitz by linebacker Lawrence Graham and fell hard on his shoulder on a third-down incompletion in the final minute of the first half. Abraham never returned, though he was still in uniform on the sideline after halftime.

“I knew I struck him, but I didn’t think he was going to be out,” Graham said. “I’m not ever intentionally trying to hurt anybody, and I hope he’s all right. … We had perfect play called up, and just free, and full-steam ahead.”

Abraham finished 17-of-23 for 167 yards, with one touchdown passing and another rushing. His replacement, sophomore Tate Whatley, was 9-of-22 for 134 yards, with no touchdowns and two interceptions. Whatley also was sacked twice.

The Golden Eagles had 164 total yards after their first two drives, and only 35 more the rest of the first half. They finished the game with 359 yards,including 58 rushing. They were also 6-for-17 on third down, and did not convert two fourth down attempts.

“It was a rough third quarter for us. We just had a couple of injuries that hurt us offensively,” Hopson said. “I give Tulane all the credit as well, they did what they need to do to win. They made plays, we certainly had a few errors. Statistically it was close to us, they made plays when they had to and I thought we were playing well at first, but we couldn’t just get it going after midway through the second quarter.”