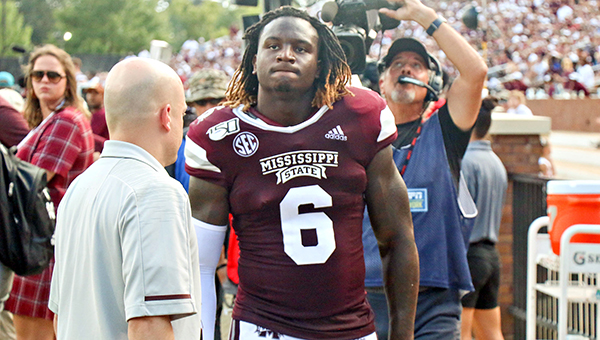 Mississippi State linebacker Willie Gay, Jr., announced Monday that he will skip his senior season with the Bulldogs to enter the 2020 NFL draft. (Walter Frazier/For The Vicksburg Post)

Gay announced his decision on Twitter. Gay, who grew up in Starkville, said that “this city and university will always hold a special place in my heart as the only home I’ve ever known.”

“Playing for your hometown team is a feeling words cannot describe and so few are blessed to experience,” Gay said in the Twitter post announcing his decision. “I am so thankful for all I have, while I pursue all I’ve ever dreamed of. After much thought and prayer I have decided to declare for the 2020 NFL draft.”

Gay recorded 48 tackles, five sacks and two interceptions in 2018. He played in only five games this season and had 28 tackles, 3 ½ tackles for loss, two fumble recoveries and one interception.

He returned an interception for a touchdown in his first game of the season, a 28-13 victory over Kentucky in September, and had 11 tackles and one forced fumble in the Bulldogs’ 38-28 loss to Louisville in the Music City Bowl last week.

Gay was one of 10 Mississippi State players withheld from eight games this season because of NCAA violations involving an academic tutor.

Gay also was reportedly involved in a post-practice altercation with starting quarterback Garrett Shrader in the days leading up to the Music City Bowl. The fight left Shrader injured and unable to play in the bowl game.

Gay is the second Mississippi State star to leave early for the NFL. Running back Kylin Hill, who led the Southeastern Conference in rushing this season, announced in December that he will enter the draft.