Chill in the Hills 10K scheduled for Saturday in downtown Vicksburg 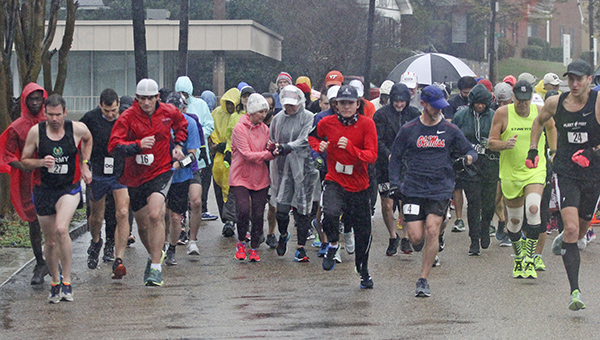 The course for the Chill in the Hills 10K run is the same as it’s been the past few years. Almost everything else around the race is getting a fresh coat of paint, though.

The Chill in the Hills will celebrate its 12th anniversary Saturday morning with the traditional 10-kilometer run, 5K race walk, and one-mile fun run. The after-party and atmosphere will have a new street festival look, however, with a DJ and photo booth among the attractions for runners and walkers to enjoy.

Even the chili bowls that are awarded to age group and overall winners are getting a makeover.

“This one is functional,” said Walter Frazier, the director of Grace Christian Counseling and race director for Chill in the Hills. “You can put it in the microwave and eat chili or cereal out of it. The old ones had a coin in them and you couldn’t put them in the microwave.”

The changes, Frazier added, are in an effort to continue to grow the race and serve its core mission as a fundraiser for Grace Christian Counseling Center. The non-profit organization provides low-cost mental health and well-being services in Vicksburg and Port Gibson.

“We want to grow this thing and find different ways that might appeal to the community. We’re trying to find ways to draw people out,” Frazier said. “Our first priority is to let people know Grace is here and about the counseling services we have available. To have 150 or 200 runners and walkers, and another 50 volunteers show up, that makes a splash in the community. Mental health and well-being is our focus, and exercise is right up our alley.”

The Chill in the Hills 10K has been under Grace Christian Counseling’s direction since 2012, and has become a fixture on Vicksburg’s running calendar. It’s the first of a half-dozen events scattered throughout the year, and also the first on the Mississippi Track Club’s statewide Grand Prix circuit.

The race typically draws between 200 and 300 runners and walkers, from recreational types out for a fun Saturday morning stroll to highly competitive runners who use it as a tune-up for marathons.
The course winds through downtown Vicksburg, beginning and ending at Martin’s at Midtown, 1101 Belmont St. Martin’s serves as the race headquarters. Race day registration will be open there from 7 to 8 a.m. on Saturday. The race begins at 8:30.

The registration fee is $40 for individual runners and walkers, and $150 for a five-person team.
Martin’s at Midtown will donate a portion of the proceeds from sales this week to Grace Christian Counseling Center.

The top finishers in each age group will receive one of the coveted chili bowl trophies that, as Frazier noted, can actually be used as chili bowls this time. That change, he said, was made because the potter who had made the bowls moved out of the area and a new supplier was needed. Susan Donald of Children of God Pottery in French Camp is making the new bowls.

“The guy that was doing them moved to the Gulf Coast and we had some hang ups with access to a kiln,” Frazier said.

One thing that hasn’t changed is weather being a factor for the race. Last year’s Chill in the Hills was contested in heavy rain. Cold temperatures and thunderstorms have been threats in other years.
This year, there is a forecast for rain and thunderstorms on Saturday morning. The race will go on rain or shine, as last year’s event showed, and Frazier was hopeful Vicksburg residents will turn out in droves to support a good cause.

“It’s been anywhere from 20 degrees to 70 degrees. We’ve had the threat of thunderstorms or sleeting. It was named the Chill in the Hills because of this time of year. But show me a race that doesn’t get impacted by the weather,” Frazier said. “You pick your date. It’s a fantastic start to the year. It’s a fundraiser that has a lot of energy behind it, and I wouldn’t trade that for any other time of year.”