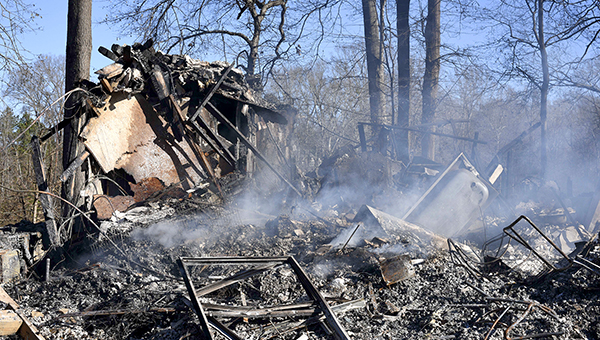 The remains of Building 9 at The Landings Apartments on Fairways Drive continue to smolder Tuesday. The building was destroyed in a fire Monday afternoon. (Courtland Wells/The Vicksburg Post)

It may be Thursday before Warren County authorities can begin searching what remains of the apartment building at The Landing Apartments, 501 Fairways Drive, to determine the cause of the fire that destroyed it Monday afternoon.

“They (firefighters) are still putting out hot spots,” Warren County Fire Coordinator Jerry Briggs said. “We may go back there today and look at it, and we’ll talk to residents to find out if they saw anything.”

“The true hero of that whole event was Don,” Briggs said. “He woke people up who would have been sleeping and would have died in the fire. He cleared every apartment.”

“He’s the hero of this fire. There are lives saved because of Don McBroom,” Briggs said. “He deserves the credit for saving numerous lives.”

McBroom, who was the first person in the building, said he was working in the front part of the complex when he received a call from the manager that Building 9 was on fire.

“I parked in front of 9 Building and all I could see when I looked up was fire shooting out from the roof already; there was a hole about 6 inches, maybe a foot,” McBroom said. “There were a few people standing in the road and I told them, ‘We’ve got to get the folks out because it’s already in the attic.’”

McBroom said he got 12 people out of Building 8 when it burned in 2011. Building 8, located next to Building 9, had heat damage from the fire Monday.

He said six people were in Building 9 at the time of the fire. Four, he said, were asleep and the other two were in their apartments. Two were on the ground floor, two on the second level and two on the third.

McBroom said a man in a third level apartment helped him open doors and go through the apartments to get pets out.

“You couldn’t see,” he said. “By the time I got to the third floor, it was completely blacked out. I had a neckerchief over my face and you see about a foot or two in front of you and that was it.”

He said he burned his hands checking walls for hot spots as he worked through the building.

He said the building “went up so dadgum fast; the other (Building 8) took hours before it was completely engulfed.” By the time he got out of Building 9, “it had already started collapsing.”

First responders were notified of the fire about 2 p.m. Monday by a 911 call. Volunteer firefighters from the Culkin, Bovina, LeTourneau, Fisher Ferry and Northeast volunteer fire departments and the Vicksburg Fire Department’s ambulance service responded to the fire.

“We had about 20 Warren County volunteers at the fire,” Briggs said.

Culkin firefighter Chuck Tate served as the incident commander for the blaze coordinating the firefight, while Elfer coordinated activities with the other agencies, such as the Vicksburg Fire Department and the Red Cross, which helped provide aid to the victims.

Briggs said Danczyk offered the use of Vicksburg’s platform truck, but water pressure in the area was insufficient for the truck’s 2,000 gallon per minute pump.

Briggs said a deputy with the Warren County Sheriff’s Office was the first to arrive at the blaze and reported flames visible from the roof area.

The building had a common attic and was not separated by firewalls, he said, adding there was nothing to slow the fire down. Firefighters tried to contain the fire on the third floor, he said, but were unsuccessful because there was heavy fire in the rear of the building, “and the wind did not help.”

Heat from the fire warped and melted siding on a nearby building’s wall, forcing firefighters to take action to protect that building.

Radiant heat from the blaze also damaged siding on two buildings directly across the parking lot from the burning one.

When firefighters realized they couldn’t save the building, Briggs said, “The plan was defensive; we didn’t want anything else to burn. Safety and make sure no one was hurt. At that point, you know it’s coming down; it’s a matter of controlling it.

Briggs said firefighters used foam on the fire because it helped the water better penetrate through the building material on the building.

According to Briggs, both buildings were rebuilt to stronger building standards.