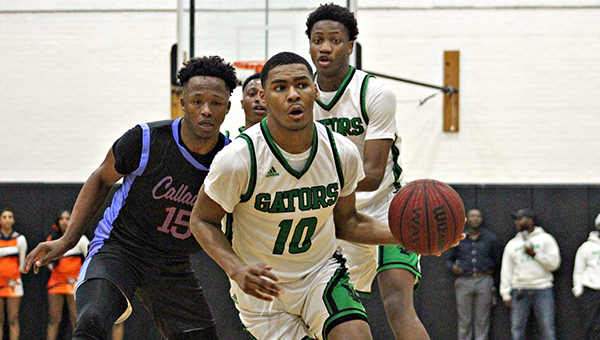 Vicksburg’s Peytin Jackson (10) drives past Callaway’s Cuwandric Samuel (15) in the second half of Tuesday’s game. Callaway beat the Gators, 76-54, in the MHSAA Region 4-5A opener for both teams. (Ernest Bowker/The Vicksburg Post)

Vicksburg High and Callaway’s boys’ basketball teams have been playing a game of cat and mouse — or, more accurately, lion and gazelle — for a long time. It wasn’t hard to see on Tuesday night which team is in which role.

Vicksburg twice cut double-digit deficits to manageable amounts, but each time Callaway surged back out to a comfortable lead. The Chargers pulled away the second time, in the fourth quarter, and beat the Gators 76-54 in the MHSAA Region 4-5A opener for both teams.

“It’s always tough going up against them. I just think the guys have to get over that Callaway name. They have to understand those guys put their pants on just like you,” Vicksburg coach Kelvin Carter said. “They’re tough, but we’ve just got to play hard and more together. You can’t shoot a 3 and then give up a 3. You’ve got to stop somebody.”

Daeshun Ruffin scored a game-high 22 points for Callaway, with half of them coming in the first quarter. Kendarius Buckley had 16 points and nine rebounds, while Johnathan Crumley and Keivion Hunt added 15 points apiece. Crumley also had 10 rebounds.

Cameron Butler led Vicksburg with 20 points, seven rebounds and five assists, and Taylon Smith scored 14 points. Butler and Smith each hit four 3-pointers, but overall the Gators’ effort was marked by a couple of red-hot runs surrounded by long droughts that allowed Callaway to seize control of the game.

Callaway jumped out to a 10-point lead in the opening minutes, and a 3-pointer by Ruffin at the first-quarter buzzer made it 19-5. The Gators opened the second quarter with a 14-2 run to get within two points, only to watch Callaway go on its own 11-2 run to take a 35-25 lead into halftime.
The same process played out in the second half. The Gators scored the first two baskets of the third quarter to get within six, then went nearly three minutes without scoring a point.

Butler closed the third quarter with a 3-pointer and Smith started the fourth with another to pull the Gators to within 51-41 and give a shot of adrenaline to the crowd. Ruffin, however, immediately drained a 3-pointer on the other end to silence it and the Chargers were off and running.

Ruffin’s 3-pointer started a 12-2 Callaway run that pushed the lead to 63-43 with four minutes remaining, and the deflated Gators never threatened again.

“We got away from running our sets. We got shots when we ran our sets. What you try to do is avoid playing the other team’s game. We want to play Vicksburg Gator ball, and we got away from playing Gator ball,” Carter said. “We don’t have the personnel to come down and go one-on-one and jack it up. But in our sets we can get a shot we want.”

The Gators don’t have long to dwell on the loss and what could have been. Tuesday’s game started a stretch in which six of eight games are within Region 4-5A, as well as a particularly difficult 10-day part of the schedule.

Up next is a tough back-to-back set of home games, with region opponent Ridgeland visiting on Friday night and crosstown rival Warren Central on Saturday afternoon. After that, they’ll go to Jackson for a rematch with Callaway on Jan. 17.

“We’ve just got to go back to the drawing board, strap up, work on some of the things we did wrong — which, we did a lot of things wrong — and get ready for Ridgeland,” Carter said. “One thing about basketball is, it’s not like football. You don’t have from Friday to Friday. It’s Tuesday and Friday will be here before you know it. You have to respond quick.”

The Vikings lost their second game in a row after putting together a four-game winning streak in December. They’ll try to get back on track Saturday, when they head across town to play Vicksburg High at 1:30 p.m.

Greenville Christian led 27-8 at the end of the first quarter, and 49-14 at halftime.