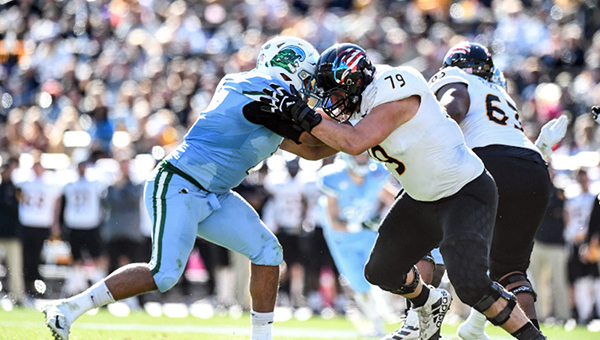 In most of its losses this season, a familiar pattern emerged for Southern Miss.

The Golden Eagles’ season-ending 30-13 loss to Tulane in the Armed Forces Bowl checked every box on the list.

Southern Miss let a 13-0 first-quarter lead slip away and gave up 30 unanswered points. It wound up with its third consecutive loss to finish the season, and headed into the offseason on a sour note.

“They made plays, we certainly had a few errors,” Southern Miss head coach Jay Hopson said after the game. “Statistically it was close to us, they made plays when they had to and I thought we were playing well at first, but we couldn’t just get it going after midway through the second quarter.”
That was a familiar theme in each of Southern Miss’ losses this season. The Golden Eagles (7-6) were outscored 107-28 in the second half of their six losses. In the last three, to Western Kentucky, Florida Atlantic and Tulane, they were outscored 48-10 in the second half.

Injuries played a big role in the Armed Forces Bowl. Running back DeMichael Harris (hamstring) and quarterback Jack Abraham (shoulder) both left the game in the first half and did not return.

Harris had four catches for 49 yards in the first quarter, and also had a 39-yard return on the opening kickoff. Abraham was 17-of-23 passing for 167 yards and a touchdown, and also ran for a TD. He was injured late in the second quarter.

“I thought we played hard and I believe we competed to the very end. … Injuries are always a part of the game and it’s just next man up,” Hopson said.

Backup quarterback Tate Whatley was just 9-of-22 passing for 134 yards, with no touchdowns and two interceptions. He was sacked twice. The Golden Eagles had 164 total yards on their first two drives, and only 35 more the rest of the first half.

Whatley played in six games and started twice in 2018, but only saw limited action in two games this year — the season opener against Alcorn State, and a November game against Western Kentucky.

“He has started for us before, he is a competitor. He is a blood and guts kind of guy,” Hopson said. “He made plays on his feet and had some nice throws. It is only his second time to be in a game with action this year, and that is a part of football. It is a good experience for him because he is a good football player and is going to be a good football player.”

Southern Miss will now head into 2020 with a surprisingly positive outlook considering the way this season ended. Only about a half-dozen starters will be lost, and Abraham will be back for his senior season.

Abraham passed for 3,496 yards and 19 touchdowns to become only the third Southern Miss player with more than 3,000 passing yards in a season.

Abraham will have some weapons as well, with leading receiver Quez Watkins (64 receptions, 1,178 yards and six touchdowns) and leading rusher Kevin Perkins (547 yards, three touchdowns) both back.
Despite the loss in the finale, Hopson said the extra practice time it provided and the momentum gained from getting a bowl bid will give the team a lift going into spring practice.

“It is always a big deal, it really is,” Hopson said last week. “Nothing hurts worse than when the season ends and you don’t go bowling. That is always a tough pill to swallow. It is a nice reward for the kids as they always work hard. It is players, coaches, and certainly a momentum builder as you get a few more practices. For the program it is always a boost.”