Alcorn State to hold championship parade in Vicksburg on Jan. 19 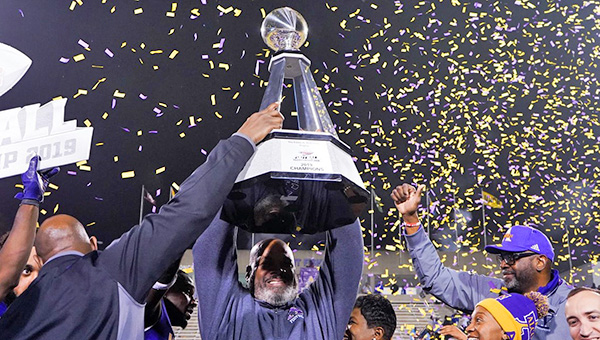 Alcorn State’s football team will celebrate its most recent Southwestern Athletic Conference championship with a parade in Vicksburg.

The City of Vicksburg and the Vicksburg Warren chapter of the Alcorn State Alumni Association will sponsor the parade. There is no charge to attend.

Alcorn head coach Fred McNair, the two-time reigning SWAC Coach of the Year, will serve as grand marshal. The 2019 team, along with the Sounds Of Dyn-O-Mite band and the Alcorn Cheerleaders, will also be on hand.

Alcorn defeated Southern University 39-24 in December to win their 17th conference championship in school history, fourth in the last six years and second in a row.

“On behalf of the City of Vicksburg, I first want to congratulate the Alcorn football team on its outstanding season. To win the SWAC Championship is a tremendous accomplishment, and to do it four times in six years speaks volumes to the success of Coach McNair and the University,” Vicksburg mayor George Flaggs Jr. said in a release. “We are honored to co-host the parade, and we encourage everyone to come out and show their support for Alcorn.”

Performers are invited to participate in the parade. There is no charge for entry, and registration is open until Jan. 15 at https://alcornsports.com/documents/2020/1/9//Vicksburg_Warren_Parade_Applications.docx?id=1577