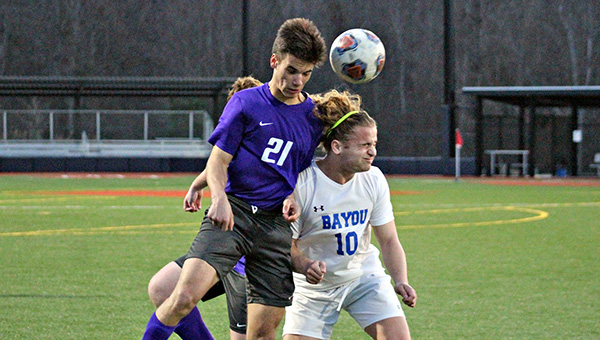 First, Kieran Theriot blew out a shoe. Then, he and his St. Aloysius teammates blew out Bayou Academy.

Theriot scored five goals — three of them in the first half — as the Flashes rolled past Bayou 6-0 in their region opener Thursday.

On Theriot’s third goal, he planted and felt his foot rip through the front of his left cleat. He quickly moved the ball to his right foot and banged a shot off of Bayou’s keeper for the goal.

Theriot got the shoe taped by a trainer and added two more goals in the second half, in the 51st and 60th minutes.

“These are some pretty old cleats, and whenever I was cutting it just slipped through. I was trying to move, actually. I trapped it and cut on this (left) foot and my foot came out. I got it and scored, and they sent me off after that,” Theriot said.

Will Dowe scored the other goal for St. Al, in the 70th minute. Cooper Madison had one assist.

The Flashes (8-2, 1-0 MAIS Division II West) dominated the game and outshot Bayou 15-5. Their performance was marked, however, by several long lulls of mediocre play.

Coach Jay Madison attributed some of it to a long holiday layoff. Thursday’s game was the Flashes’ first in 26 days, since Dec. 14.

“It’s mistake after mistake after mistake, and it’s just that we haven’t touched the ball much. We’re glad to get through a district game, and that’s where it is,” Madison said. “It’s a process. We felt like we were doing well with where we were and then the break comes and we take a few steps back. A lot of teams do that, though, so that’s the way it is.”

Some lineup adjustments and a big early lead didn’t help in knocking off the rust, Madison added. Theriot scored his first goal three minutes into the game, and got the second 10 minutes later.

Theriot’s third, the one he destroyed his shoe to get, came in the 23rd minute and gave St. Al the 3-0 lead it took into halftime.

“You would think (it would help), but in a game like this after we scored those goals everybody starts thinking this is a goalfest. We started doing things we don’t normally do, and things that won’t work against really good competition,” Madison said. “Obviously, when you get three goals you’re good. You don’t complain about it. But after the fact, if I’m analyzing it, I sure would have liked to have had maybe a 3-0, more competitive game. I’m sure (Bayou) would have too.”