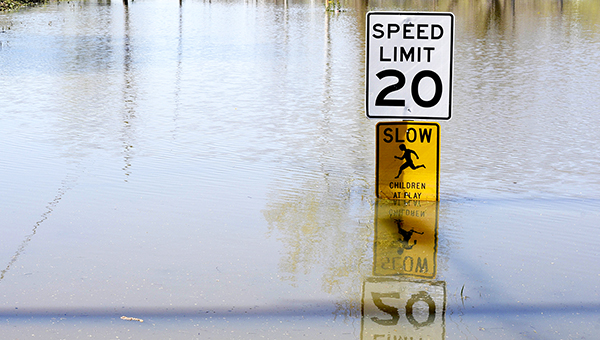 Heavy rain in the northern Mississippi Valley and the Ohio Valley could contribute to the Mississippi River at Vicksburg rising above flood stage later this month, a National Weather Service Hydrologist said.

“Right now, there is potential,” said Marty Pope, hydrologist with the National Weather Service Jackson office. “Everything will depend on what (rainfall) we get.”

Presently, he said, the National Weather Service’s 16-day forecast has the Ohio River at Cairo, Ill., forecast to reach almost 51 feet by Jan. 18, “Which would put Vicksburg somewhere crossing flood stage sometime toward the end of the month.” Thursday morning, the Mississippi at Vicksburg was at 37.7 feet.

The U.S. Army Corps of Engineers Vicksburg District is expected to close the Steele Bayou Control Structure gates Friday, citing a National Weather Service forecast indicating the Mississippi River was expected to reach 41 feet Friday and go past flood stage near the end of the month.

“We’re looking at the Weather Prediction Center forecast of 3 to 4 inches going to Northwest Arkansas, southeast Missouri, across the southern two-thirds of Illinois, Indiana and then into portions of Ohio,” he said.

“There’s some pretty steep rainfall totals if that holds up, but that is over a seven-day period.”

The first event, he said, is the storm system that is also predicted to hit Mississippi Friday and Saturday, and expected to “give us probably 1 to 11/4 inches across that whole area in the northern part of the Mississippi River Basin.

“Models show a pretty heavy line of storms coming through here and going right up the Ohio Valley and it’s going to be really fast, but it’s going to dump some decent rain when it comes through there,” he said.

A second event, he said, is expected to follow by mid-week with other rain events to follow.

The weekend system, Pope said, is set up to push a lot of rainfall across the Mississippi Valley, “So any rainfall we get could actually go into the parts of the Sunflower and that area in there in the upper portions of the backwater area; we’ll have to watch that as well.”

The northern part of the Mississippi River Basin will get the heaviest rain in the storm.

“It will move through fairly fast when it gets here, and then it will back up Monday or Tuesday, and give some low-end stuff in this area, and then another cold front will come through the area later in the week,” he said.

Pope said the Vicksburg area is forecast to get 3-5 inches of rain over the next week.

“Thunderstorms will affect the rainfall with the heavier storms in the area,” he said.

“I think the front going through Friday and Saturday will have a lot more severe weather than the flood aspect,” Pope said, “(But) The flood aspect will still be big because we’re so wet.”

“A lot of it’s going to be in the upper areas of Arkansas, and that will take some time to get down to Arkansas City.

“Some (rain) will fall in the mid-Mississippi River from St. Louis (Mo.) south, and some will fall in the Wabash (River) and those areas in Illinois and Indiana that will take some time to get to the Ohio River, the heaviest, at least,” Pope said.

He said the seven-day National Weather Service rain forecast shows 3-5 inches falling in the northern Mississippi River Basin, while the 16-day shows 7-8 inches falling over the Arkansas River area and then 4, 5, and 6 inches in the Ohio River Valley. “That’s what we’re going to have to watch over the next so many weeks as this storm system pushes on through,” he said.

Rain is forecast Wednesday in the area south of Cairo and then up the Ohio valley, with two other systems on Jan. 19 and 22 producing rain. The weather system on Jan. 22, he said, “Will be more ice than rain but will still add enough to lower part.

“There’s just a lot of events that keep going,” Pope said. “We’re in a 3-5 day cycle right now. The Mississippi is forecast to be over 43 feet Jan. 25. That will depend on how much rain we get beyond that or up there.”