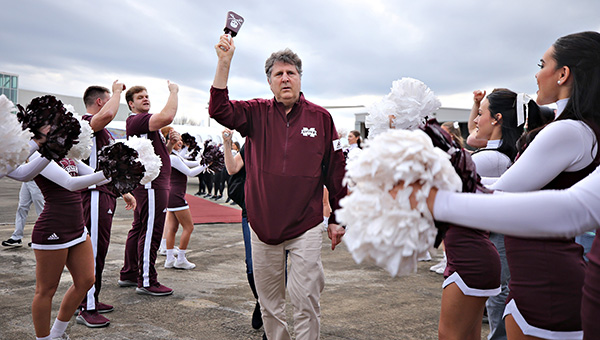 STARKVILLE (AP) — The pirate is heading to Starkvegas.

Mississippi State hired Washington State’s Mike Leach as its new head coach Thursday, bringing one of the nation’s quirkiest and most successful coaches from the Pac-12 to the Southeastern Conference.

Mississippi State announced it hired Leach with a social media hype video that included its new coach bellyflopping into a pool. Leach signed his contract alongside Cohen at his vacation home in Key West, Florida, Thursday morning and arrived in Starkville just after 3 p.m.

As he stepped off the private plane and onto a maroon carpet rolled out on the tarmac, Leach rang a cowbell as he walked through a gauntlet of cheerleaders and MSU band members, before meeting several players at the end. Leach then spent more than 10 minutes shaking hands and signing autographs for several hundred fans gathered along a fence.

Leach did not take any questions from the media. That will come Friday at noon, when he’s formally introduced at a press conference at the Leo Seal Jr. Football Complex on campus. The press conference will be open to the public, and it will be carried live on the SEC Network, SEC Network+ via the ESPN app, @HailStateFB Twitter and Facebook.

“I can’t tell you how excited I am to be the head football coach of the Mississippi State Bulldogs,” Leach said in a statement announcing the hire. “I loved Washington State, but I am excited for the next chapter in the SEC. It’s a privilege to be a part of the MSU family, and we look forward to getting down to Starkville shortly.”

College football in the state of Mississippi has gotten a lot more interesting over the last month, with Leach joining new Ole Miss coach Lane Kiffin.

“Welcome to the state old pirate and friend!!” Kiffin tweeted.

Leach will replace Joe Moorhead, fired last week after two seasons. The post-bowl game firing was unusual, but the Bulldogs now have a coach with a long track record of winning at programs that have historically struggled. In 18 years at Texas Tech and Washington State, Leach is 139-90, using his Air Raid offense to set records and consistently reach the postseason.

At Washington State, Leach took over a program that had been mired in the Pac-12 basement and went to five straight bowl games, including a school-record 11 victories in 2018.

He finished 55-47 in eight seasons with the Cougars. He produced a similar turnaround at Texas Tech, taking the Red Raiders to bowl games in all 10 seasons.

“Mike Leach is a proven winner who has established a culture of excellence for nearly two decades as a head coach,” Mississippi State athletic director John Cohen said in a statement. “An offensive genius and two-time national coach of the year, he has a track record of building programs to national prominence with accountability and a blue-collar approach. We are thrilled to welcome him and his family to the Mississippi State family and look forward to watching our football program grow under his leadership.”

Leach’s style is anything but typical. Leach gets a lot of attention for his news conferences, where he has been known to dole out wedding advice, once pondered which Pac-12 mascots would survive a fight, and told tales about his passion for pirates. He taught a class at Washington State last year about football and combat.
It has not all been fun and games, though.

Leach was fired by Texas Tech after being accused of mistreating a player, Adam James — the son of former ESPN announcer and NFL player Craig James — who had suffered a concussion. He then clashed with his bosses, and sued Texas Tech for wrongful termination. The school was protected by state law, but Leach is still trying to fight that case. He also filed a lawsuit against ESPN and Craig James that was later dismissed.

When his teams have struggled, his news conferences have been far less amusing. Leach has not been shy about calling players soft and making other disparaging remarks.

But on the field, his teams win more than they lose and his quarterbacks typically throw for more yards than just about anyone else. Washington State has led the nation in passing four times since 2014 and never finished worse than third during his tenure.

Washington State led the FBS in passing yardage this season by averaging 437.2 yards per game. Mississippi State ranked 109th out of 130 FBS teams, at 179.5 yards per game.

Leach, who has drawn interest from SEC schools before, including Tennessee a couple of times, is one of the godfathers of the modern spread passing game. He helped develop the Air Raid offense at Division II Valdosta State and Kentucky under Hal Mumme.

Leach brought that wide-open style to the Big 12 when he was hired by Bob Stoops to be offensive coordinator at Oklahoma in 1999. The next year, he landed in Lubbock, Texas. Texas Tech had been mired in mediocrity for years, but under Leach never finished below .500 and had nine straight seasons with at least eight victories.

After the acrimonious end of his tenure at Texas Tech, he was out of coaching for two years before being hired by Washington State, another program that had been languishing. The Cougars won only 12 games in his first three seasons, but went 43-22 from 2016-19.

“Mike has transformed Washington State football into a national brand and we will be forever grateful,” they said in a statement.

Washington State finished 6-7 this season, including a seventh straight loss to rival Washington. While Leach was regularly able to beat Pac-12 North rivals Stanford and Oregon at Wazzu, his only victory in the Apple Cup was in the first one he coached.

Mississippi State also went 6-7 this season under Moorhead, but that wasn’t enough for the former Penn State offensive coordinator who was hired after Dan Mullen left for Florida in 2017.

Mullen was one of the most successful coaches in the history of the program, raising expectations in Starkville — the small town in east Mississippi affectionately known as Starkvegas around the SEC — for a team that has usually finished near the bottom of the SEC West.

Mississippi State has reached a bowl game in 10 straight seasons.
Leach won’t face quite the rebuild at Mississippi State that he had at Washington State. The Bulldogs have won six of the last 10 Egg Bowls vs. Ole Miss and Moorhead went 14-12 in his two seasons.

But narrowing the gap on SEC West superpowers LSU and Alabama was something even Mullen could not do. Mississippi State will now turn to Leach to take that next step.
Leach marks the first time Mississippi State has hired a head coach with previous head coaching experience since Jackie Sherrill in 1991, and only the third time in 13 coaching changes since 1951.

“I want to commend Athletics Director John Cohen and his staff for conducting a very thorough and true national search,” Mississippi State President Mark Keenum said in a statement. “In Coach Mike Leach, that search produced a charismatic leader who has proven he can both win football games at a high level and motivate teams to play up to their potential. I’m excited about the future of our football program.”