Vicksburg native Hosemann sworn in as state’s next lieutenant governor 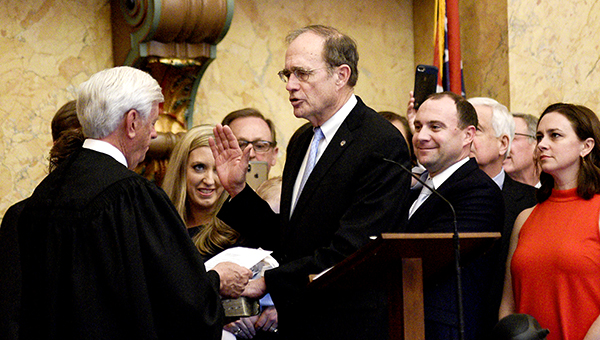 JACKSON (AP) — Mississippi’s new lieutenant governor, Delbert Hosemann, said immediately after his inauguration Thursday that he wants to work with all lawmakers to improve education, enact pay raises for state employees and address problems in the state’s prison system that has been rocked by deadly violence.

“We’re all in this together,” Hosemann told lawmakers and other officials in a crowded House chamber at the state Capitol.

Hosemann was among seven statewide elected officials who took the oath of office Thursday. His predecessor, Tate Reeves, will be inaugurated as governor on Tuesday.

Hosemann, who previously served three terms as secretary of state, said the rotunda at the center of the Capitol does not need to divide the House and Senate.

“It’s not going to be a chasm as long as I’m blessed to be the lieutenant governor,” Hosemann said.

The Vicksburg native said despite his years in office, he is still in awe of the opportunity to serve and to do so as the state’s lieutenant governor.

“I never saw myself being in this position and I’m still awed when I walk up to this building and see the golden eagle on the top,” Hosemann said. “I can’t believe I have a position here.

“I grew up in Vicksburg and it was a big thing to drive to Jackson; it wasn’t a four-lane then. Never would have anticipated citizens of Mississippi would’ve hired me to come and have an office here. I still remain in awe, in awe of the building and in awe of the fact that I have the opportunity to work here.”

Vicksburg Mayor George Flaggs Jr., who himself served for years in the Legislature, attended Thursday’s ceremony.

“I think it is great for all of Vicksburg to have a Vicksburger serving as the state’s lieutenant governor; to be in a position to not only provide progressive leadership to the state, but to help Vicksburg along the way,” Flaggs said.

The statewide officials were elected in November, and all are Republican. Some have changed offices.

The new attorney general, Lynn Fitch, is the first woman to serve as Mississippi’s top legal officer. She is the first Republican in that job as she succeeds four-term Attorney General Jim Hood, a Democrat who ran unsuccessfully for governor last year. Fitch served the past two terms as state treasurer.

The new secretary of state is Michael Watson, who served three terms in the state Senate.

The new treasurer is David McRae, who worked as a manager of his family’s investments.

Insurance Commissioner Mike Chaney was sworn in for a fourth term.

Auditor Shad White and Agriculture Commissioner Andy Gipson were both appointed to office by Republican Gov. Phil Bryant during the last term. Each begins a full four-year term.