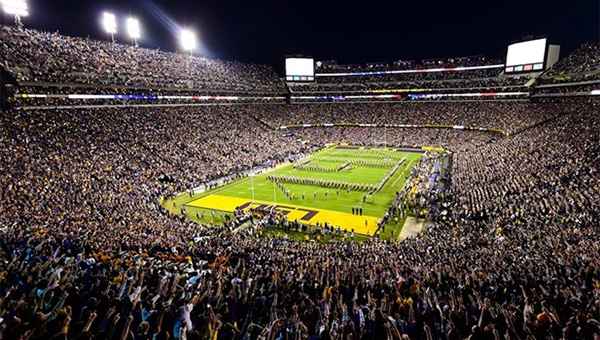 A lot of my best sports memories involve sitting in LSU’s Tiger Stadium.

The first college football game I ever attended was the 1994 season opener against Texas A&M. I was there for Curley’s Last Stand, The Night the Magic Came Back, and the highs and lows — sometimes in the same game — of the Les Miles era. I saw No. 1 Florida go down and a tuba player become a legend by running over Auburn’s kicker.

I’ve sat in the rain for disappointing losses and stormed the field — or slowly made my way down; it’s hard to storm it when you’re in the second deck — after big wins. I’ve screamed at the top of my lungs alongside 90,000 of my closest friends on a humid September Saturday night, and sat in the dark alone with just my thoughts on a random Wednesday in March.

It’s been almost a decade since I’ve been there. Living a couple hundred miles away and being a sports writer whose fall Saturdays are often booked makes it tough to visit. But those formative experiences have stuck with me since I enrolled at LSU in 1994 and became, for better or worse, a Tiger for life.

LSU isn’t a program like Vanderbilt, where another 100 years of football will probably never bring a chance at a national title. It’s not Alabama or Ohio State, either, where anything less than that can get a coach run out of town.

LSU is above average, but still in the middle. We tend to have these seasons every six or seven years — the last great one was in 2011, but it ended in disaster — which is just enough to let you appreciate how rare it is. We’re neither starving for success nor spoiled by it, which seems like a good place to be.

What also makes seasons like this special is how they seem to come out of nowhere for LSU. Sure, the Tigers were a preseason Top 10 team this year, but no one expected Joe Burrow to become Joe Burreaux, Heisman Trophy winner. No one expected Ed Orgeron to become a coaching savant. No one expected often-underachieving LSU to have one of the best seasons in college football history.

The unexpected gifts are always the best. Hopefully the “good Tigers” have one more in store Monday night.