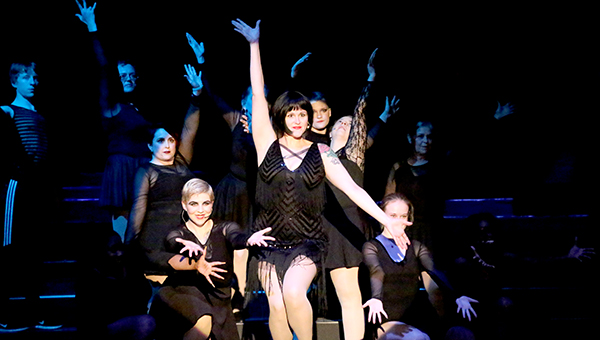 Local theatre patrons will have the opportunity to enjoy the longest-running American musical in Broadway history when the Vicksburg Theatre Guild performs “Chicago.”

“This show is iconic,” director of the VTG production Sarah Goss said. “Almost everyone has at least heard of it. The music is amazing and the dancing classic.”

Based on a play of the same name, which was written by newspaper reporter and playwright Maurine Dallas Watkins in 1926, the musical is a satire of true events Watkins covered in Chicago in the 1920’s.

“Chicago” revolves around seven women who have been accused of murder and are trying to escape their convictions and gain the public’s support by using their feminine virtues, Goss said.

Heather Calnan plays Velma, who is one of the seven.

“I am very excited about this role,” Calnan said.

In addition to singing the most iconic song in the show, “All That Jazz,” Calnan said, her favorite part of the production is the dancing.

“I would say my favorite part of this production is getting to perform choreography that is inspired by Bob Fosse. I have loved his choreography/style of dance since I took a dance camp at Debra Franco’s School of Dance with Anthony Newman when I was about 11-years-old,” she said.

Calnan and Genevieve Rushing are serving as choreographers for the show.

“There is a lot of dancing in the show,” Goss said. With almost 40 years of dance experience between Calnan and Rushing, she said, she feels confident in her choreographers. “Both of them are extremely familiar with Fosse and have even studied his classic moves. They are staying true to Fosse, right down to the specific hand placement and clean lines he was noted for.

“Anyone familiar with Fosse will recognize it right away.”

Rehearsals for “Chicago” began in October and to date, the cast has logged in more than 100 hours not including time spent on set construction.

Comprised of 19 members whose ages span 50 years from youngest to oldest, Goss said, the cast has worked well together.

“When you put on such a large production, you develop very close bonds with your cast,” she said. “Everyone is so excited and enthusiastic to be a part of such a classic.”

Kameron Parker, a senior at Warren Central High School, said she has always wanted to do musicals with the VTG.

Prior to her role in “Chicago” as Hunyak, a Hungarian woman who was sent to jail for the murder of her husband, Parker said she was part of the VTG “Hunchback of Notre Dame” cast and she was active in the theater’s Fairytale plays.

Willis Thomas, Jr., who is an engineer in Vicksburg, said this is his second time to perform with the VTG.

“I think working with Sarah on my debut musical “Mamma Mia” made me want to give this one a chance,” Thomas said. “Once I did some research and realized the backdrop for this musical I thought it would be pretty cool to go for it.”

Working with Goss as assistant director is Amy Crews.

“She and I have been in shows together and I’ve directed her a time or two,” Goss said. “This time, she’s stepping behind the camera, so to say.”

With so much talent in the community, Goss said, she encourages people to support the local theaters.

“Having such a vibrant fine arts presence in our community is a gift. Community Theater provides a place for unity while encouraging diversity. We have people from all backgrounds that participate in our productions,” Goss said. “It doesn’t matter where you come from, what you look like, where you go to school. At the theater, we are a family. And that’s a wonderful thing for any community.”

“Chicago” will open Friday, Jan 31. The performance will begin at 7:30 p.m. at the Parkside Playhouse Theatre, 101 Iowa Blvd.

“Chicago” is not part of the membership season.