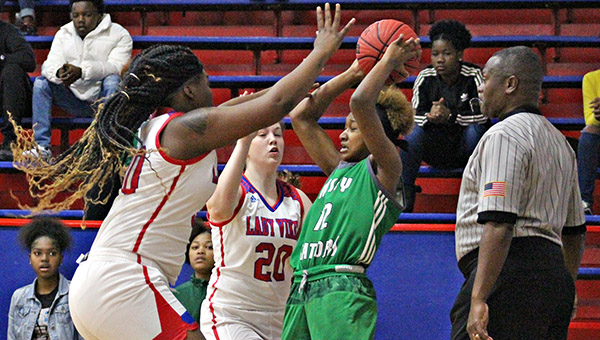 Vicksburg’s Yakia Burns, right, is pressured by Warren Central defenders Zy’Kerri Segrest (30) and Ashley Raney (20) during a game in December. Saturday’s rematch between the teams has been postponed until Feb. 1. (Ernest Bowker/The Vicksburg Post)

Because of the threat of severe weather on Saturday, the basketball games between Warren Central and Vicksburg High have been postponed.

Saturday’s postponements were part of a round of schedule shuffles caused by a storm system that will move across Mississippi Friday night and into Saturday. Severe thunderstorms bringing heavy rain and the threat of hail and tornadoes are forecast.

Friday’s basketball games between Vicksburg High and Ridgeland were moved up two hours, and will be played at 4 and 5:30 p.m. at VHS.

St. Aloysius also moved up the start of its home basketball games against Park Place. The junior varsity games will begin one hour early, at 3 p.m., and the varsity at 5.

There has been no change in the plans for the Chill in the Hills 10K run and race walk in downtown Vicksburg. It is scheduled to begin at 8:30 a.m. in front of Martin’s at Midtown, 1101 Belmont St. Race director Walter Frazier said Thursday that the race would be delayed if lightning and storms are present, but there are no plans to postpone it.