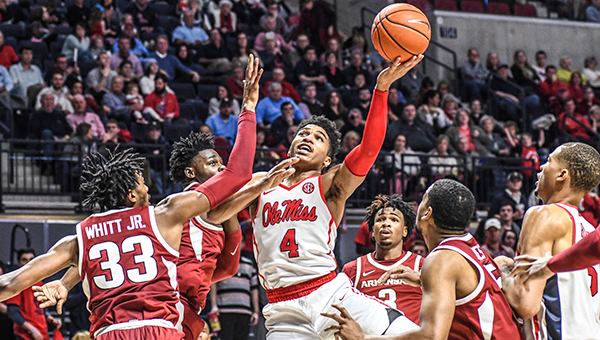 OXFORD (AP) — Isaiah Joe scored 34 points and added a game-saving steal before converting a pair of free throws with 17 seconds remaining as Arkansas rallied to defeat Ole Miss 76-72 on Saturday.

Arkansas (13-2, 2-1 Southeastern Conference) wiped out a 60-51 deficit with seven minutes remaining. Joe scored 28 second half points including 14 in the decisive stretch run. The clinching steal preserved a 72-70 lead and forced an Ole Miss foul. Joe converted two free throws for an insurmountable 74-70 cushion.

Mason Jones scored 13 points and added nine assists with six rebounds, while Jimmy Whitt Jr. added 11 points for the Razorbacks. Arkansas was 14-for-14 from the free throw line in the second half, and 22-of-27 overall.

Breein Tyree scored 27 points for Ole Miss (9-6, 0-2), but the Rebels went 2-of-8 from the field with two turnovers in the final four minutes.

Blake Hinson scored 13 points. KJ Buffen had 12 points and 10 rebounds, while Devontae Shuler had 10 points and a game-high 11 rebounds.

The Rebels have shot less than 41 percent in three consecutive games. Three of their next four games are on the road, beginning with a trip to Florida on Tuesday.

UTSA 80, Southern Miss 70
Southern Miss got within a single possession several times in the second half after trailing by 11 early, but UTSA did just enough to pull out a victory on Saturday afternoon.

The Roadrunners entered the day as the conference leader in three-pointers (158) and went 15-for-27 from deep. Jhivvan Jackson hit three and Keaton Wallace four as they finished with 23 and 16 points, respectively.

Southern Miss got to within three points on three separate occasions in the second half, the last when Watson hit a free throw to cut it to 67-64 with 6:28 remaining. Each time, however, UTSA (8-9, 2-2) answered with a run to maintain the lead.

Southern Miss lost its fourth game in a row, and third straight on the road. It will return home for two games next week, Thursday against North Texas and Jan. 18 against Rice.

Crosby’s jumper with 9:10 left in the game pulled Alcorn to within 53-50, but it never got closer. The Braves went 1-for-8 from the field over the next 6 1/2 minutes to allow Jackson State to push the lead back to double digits.

Trevon Hester led Concordia (5-9, 0-4) with 19 points. The Tornadoes missed four 3-pointers in the final minute that would have tied the game.