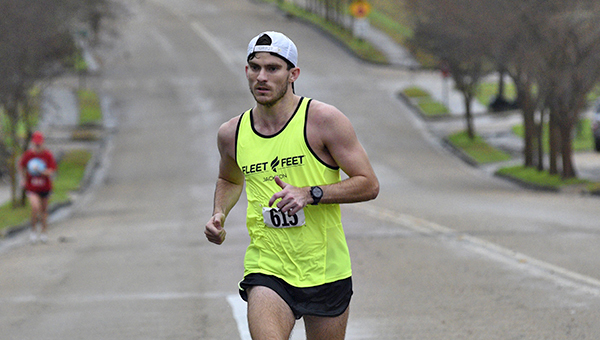 Ryan Crandall finishes on the last straight of the Chill in the Hills 10K run on Saturday. Crandall was the overall winner of the race, with a time of 36:35. (Courtland Wells/The Vicksburg Post)

To the west, a line of strong thunderstorms was bearing down. To the east stood a potentially angry boss.

In between these two powerful forces of nature, Ryan Crandall found room to hustle into Vicksburg and run right back out with a trophy he’s wanted for years.

The Madison resident conquered the weather, the course and the work world on Saturday by winning the Chill in the Hills 10K run in downtown Vicksburg. Crandall drove in from Madison ahead of the storms that raked the city near dawn, ran and won the race, then drove back to Jackson for the start of his work day at Fleet Feet — all before noon.

“Getting to work on time was probably the biggest ‘Oh no’ moment for me, but it worked out,” the 26-year-old said. “It’s a very big race. That’s one of the races I haven’t won yet, so I wanted to put it on my bucket list. I enjoyed it when I did it years ago and enjoyed it now, even though it was hilly and rainy.”

Crandall finished with a time of 36 minutes, 35 seconds, comfortably ahead of the rest of the field. Andrew Klock was second in 39:06, and Nick Lenssen was third in 41:28.
Women’s winner Hannah Christensen finished fourth, with a time of 44:13, and women’s runner-up Katie Reese was fifth in 47:40. 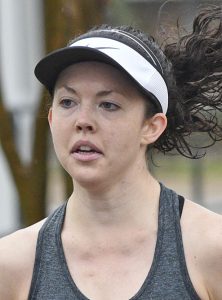 “I was looking back at each corner because I wanted to know where (Klock) was. I lost contact with him at Vicksburg High School,” Crandall said, referring to the landmark that is near the 5-mile point of the 6.2-mile race. “I was very happy with my performance, with it being hilly and rainy.”

Christensen won the women’s 10K championship in her first try at the race. The 30-year-old moved to Vicksburg from Utah about four years ago and said she’s more of a recreational than competitive runner.

“I’ve done a lot of the other local races in the last couple of years, but had never done this one so I thought I’d sign up for it. I considered not coming, with the weather, but I’m glad I came. It was fun,” Christensen said. “It was definitely not PR conditions. I thought I’d just come and do it for fun.”

Christensen said her winning time wasn’t bad for her, considering she was running the course blind. This was her first Chill in the Hills, and she also forgot to bring a tracker to tell her where she was on the course.

“I forgot my Garmin (GPS) at home, so I had no idea what my pace was. I was really just running off of effort,” Christensen said. “I went off of feel and tried to run a good effort, but a happy pace. I didn’t have a lot of people around me. A friend of mine was out in front of me for the first couple of miles, but then I lost him and was on my own for most of it. Since I wasn’t familiar with the course I didn’t know what to expect with all the turns and hills.”

Pranger said he gained the edge on Guy when Guy had to break stride mid-race for an equipment malfunction.

“Keith was in front of me, and then about halfway through he stopped because his shoe came loose and he stopped to tie his shoes. He said he was also having some hamstring problems,” Pranger said.

Pranger won the Chill in the Hills for the second time in three years, and he was second in 2019. Saturday’s time was the slowest of the three, which he attributed to the wet conditions on the course.

The line of severe thunderstorms that passed through Vicksburg around 6:30 a.m. did not delay the scheduled start of the race two hours later, but a light ran continued to fall for much of the morning and left the downtown streets slick.

It was the second year in a row that rain has plagued the race. The 2019 edition was run in a heavy downpour. The bad weather, which moved east through Jackson during the morning, also crimped attendance. Only 70 people completed the 10K run, 5K walk, and one-mile children’s fun run. More than 100 had registered ahead of time, and when the weather has been good for previous runs the event has drawn several hundred runners and walkers.

“We knew from the weather forecast it was going to be wet and rainy, but at least this year compared to last year it was warmer. The rain stopped during the race, but it was still kind of wet on the course so it was slower for everybody,” Pranger said. “Keith Guy and Ron Roma were pushing me the whole way, but still my time was a little bit slower. I’m happy I finished.”

Mallard won the women’s title for the third year in a row by winning another duel with Angel Curry.

Curry took the lead early in the race, but Mallard caught up and passed her near the halfway point and stayed just ahead the rest of the race. At the Over the River Run in October, Mallard overtook Curry in the last quarter-mile to win.

Curry finished second in the women’s division, and fifth overall, with a time of 36:28.

“I caught her a little earlier this time than at the Over the River. This was a 5K instead of a 5-mile. I kept her in my sights from the beginning, and about mile 2 ½ was able to come through with the hills. It was great,” Mallard said. “This one is always an interesting race because you never know what the weather is going to be. So you just have to come prepared for anything. I had really good competition today.”

Yosef Agyepong won the children’s one-mile fun run with a time of 8:11, to lead four members of his family in the top five. Jennifer Agyepong was second in 8:37, April Agyepong fourth in 9:30, and Yeshua Agyepong fifth in 9:33.

Russell Foster broke up the family’s run by finishing third, with a time of 9:20.