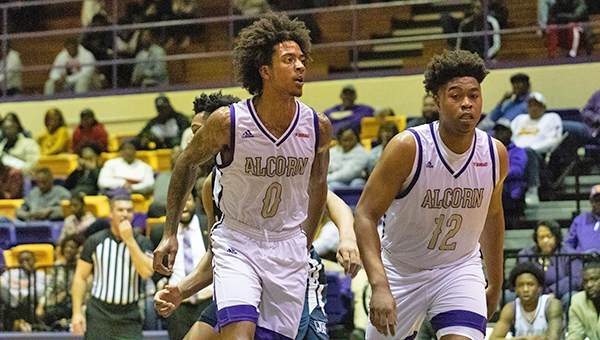 Troymain Crosby added 16 points and seven rebounds for the Braves (6-9, 2-2 Southwestern Athletic Conference), who were 13-of-31 from 3-point range. Corey Tillery had 11 points and eight rebounds.

Alcorn opened the game with an 8-0 run and never trailed. Andrews’ 3-pointer with seven seconds left in the first half gave the Braves a 39-31 lead at halftime.

Another 3-pointer by Andrews capped a 16-7 run coming out of the break and put Alcorn ahead 54-38, and Grambling was never within single digits again. Alcorn led by as many as 24 in the second half.

“After the game Saturday (a 76-65 loss to Jackson State), we were preaching energy, effort and just bring it for an entire 40 minutes,” Alcorn coach Montez Robinson said. “I thought we came out and played from the tip, all the way to the final buzzer. The guys played the way they know they can play. We didn’t get stagnant tonight on the offensive end. We rotated the ball and moved it around. We also did a great job of not pressing to get open looks and we let the offense work.”

Cameron Tucker had 13 points and seven rebounds for the Bulldogs (5-10, 2-2). Garrett Hicks and Cameron Alford had 10 points each.

Alabama A&M chopped an 18-point second-half deficit to one, on a jumper by Evan Wiley with 4:08 remaining and then again on a layup by Alford a minute later that cut it to 66-65. The Bulldogs missed their last seven shots from the field, however, and Valley was able to put the game away at the free throw line.

Southern led by seven early in the second half, but Jackson State went on a 13-3 run to take a 40-39 lead with 10:02 remaining. The teams stayed close from there, until Southern finished the game on an 8-2 run over the last 70 seconds.

Lee’s jumper with 1:10 to play gave Southern the lead for good, at 50-48. The Jaguars’ last six points came from the free throw line.

Roland Griffin had 18 points for Jackson State (5-12, 2-2). Jayveous McKinnis added 11 points and Jonas James scored 10. The Tigers went 1-for-4 from the field and committed one turnover in the last 2:34.

Tristan Jarrett scored only two points despite heading into the contest as JSU’s leading scorer at 20 points per game. He was 0-for-5 from 3-point range.