Gov. Reeves pledges to work ‘for all Mississippi’ 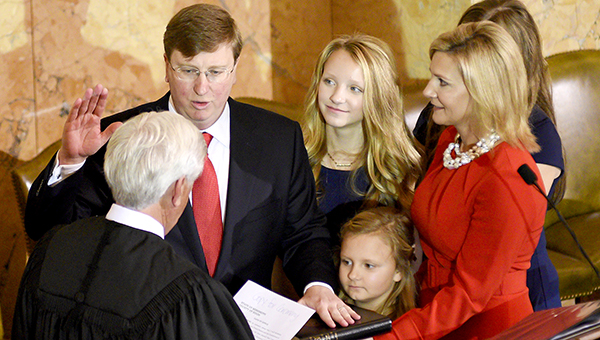 Tate Reeves, surrounded by his family, takes the oath of office to become Mississippi's 65th governor Tuesday during a ceremony at the State Capitol in Jackson. (Courtland Wells/The Vicksburg Post)

JACKSON (AP) — Republican Tate Reeves was inaugurated Tuesday as Mississippi’s new governor, pledging to provide economic opportunities for all people in the state and to defend a “loving culture that underpins our quality of life.”

Reeves, 45, is the 65th governor of Mississippi. He succeeds Republican Phil Bryant, who served two terms.

“This will be an administration for all Mississippi,” Reeves said during his inaugural speech.

Reeves served two terms as lieutenant governor and two terms before that as the elected state treasurer. He took the oath as governor before family, friends, lawmakers and other officials in the House chamber of the state Capitol.

“A culture of love and kinship has knitted Mississippi families together, and tied them to each other, for ages,” Reeves said. “It is what makes us special in a fast-paced and transient world. I will defend that culture against the erosion that frays societies.”

He said he will ensure that state government reflects “the love we have for each other,” including taking care of foster children and special-needs children.

It will mean cleaning up the prison system “to provide for the safety of our citizens and the human dignity of all within the system,” Reeves said. “It will mean making sure state government is not causing more problems than it solves.”

Bryant and Reeves have pushed tax cuts and trimmed state budgets. Reeves inherits several immediate challenges as governor, including an understaffed state prison system that was recently shaken by violence that left five inmates dead and an undisclosed number injured.

Bryant was lieutenant governor for one term before winning the governorship in 2011. Mississippi governors are limited to two terms. Bryant said Tuesday that he will keep a low profile as he enters private life.

“Old governors ought to stay quiet for a while,” Bryant told reporters in the House chamber. His wife, Deborah, said with a smile that she will make sure he does that.

Republicans this term have maintained control of the Mississippi House and Senate. With Hood out of office and replaced by a Republican, the GOP now holds all eight statewide offices.

Mississippi has among the lowest teacher salaries in the United States. Reeves and legislative leaders have all said they want to enact a teacher pay raise this year, although they have not released specific proposals.

“I am committed to elevating our public schools,” Reeves said in his inaugural speech. “That means a pay raise for every teacher — and a new mission to give us more national board-certified teachers per capita than any state in the nation. You will note that I did not say more than anyone in the Mid-South. I didn’t say number one in the Southeast. I said number one in the nation.”

“We heard a lot of good things, if we can just make it come to fruition,” Clarke said.

Reeves is keeping some state agency directors from the Bryant administration. He will replace others, including Corrections Commissioner Pelicia Hall, who announced Dec. 31 that she would leave her job in mid-January to work in the private sector.

Hall and other corrections officials had repeatedly told Reeves and other legislative budget writers that Mississippi has difficulty hiring enough prison guards because of low pay, long hours and the dangers of the job. Despite that, legislators reduced spending on the prison system during the current year, which started July 1, and they are recommending another reduction for next year. As lieutenant governor, Reeves has had a prominent role in setting state budgets.

Story written by Emily Wagster Pettus with the Associated Press.