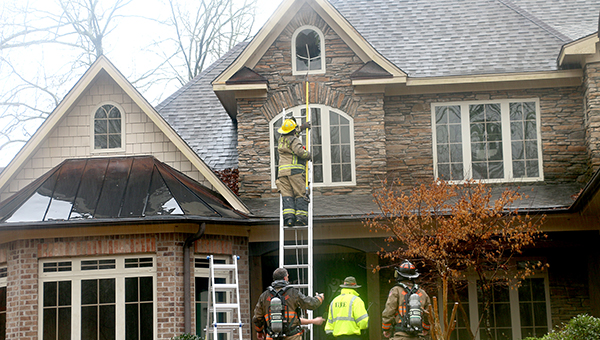 Firefighters with the Culkin Volunteer Fire Department responded to a house fire Tuesday afternoon on Cole Lake Road in the Bovina area. The fire was started by a lightning strike. (Terri Cowart Frazier/The Vicksburg Post)

BOVINA — During Tuesday’s storms, a home in the Bovina area was reportedly hit by lightning causing an attic fire.

Dale Jennings, owner of the Mississippi Barbeque Company in downtown Vicksburg, was at home when he heard lightning strike the home located on Cole Lake Road off of Tucker Road.

“I had just laid down to take a nap and the lightning went off. I woke up,” he said, knowing it had hit something and walked outside.

Jennings said he thought the lightning had hit a tree, but couldn’t find any evidence.

“And then all of the sudden I heard alarms going off — fire alarms, and I couldn’t understand what it was and then a minute later the house was full of black smoke,” he said.

“We do not know where it hit yet,” Tate said. “We have not found that spot.”

Locating the origin of the fire was hampered by all the smoke.

Jennings said he had not seen any flames, only the smoke pouring from the eves.

“It’s smoldering somewhere you just have to find it,” Tate said, explaining that spray foam insulation had been used in the house and the fire was most likely underneath the insulation.

“Spray foam is great for insulation, but lousy for firefighters,” he said.

In an effort to locate where the fire started, fans were being used to vent the smoke out of the house.

Windows of the home were also purposely broken to release the toxic smoke.

Tate said burning spray foam releases toxic smoke making it nearly impossible to breathe. And because of its toxicity, Tate said, his men would be required to wash down their uniforms and gear once back at the station.

Fortunately, no one was injured at the scene.

“I am just so glad the girls were at school,” Jenning’s wife, Ashley, said.

According to the EPA government website, isocyanates, hydrogen cyanide, amines, and other toxic chemicals can be released into the air from spray polyurethane foam.