While volunteering, Vicksburg family has chance to FaceTime with deployed son 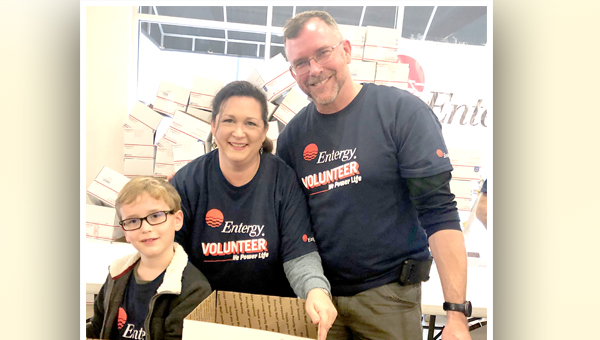 In December, organizations — including Entergy Mississippi — joined Cub Scout Pack 164 in Madison to prepare care packages for men and women serving in the military and stationed overseas during the holidays.

The scouts and Entergy employees collected thousands of items for our troops, while scouts and other volunteers wrote letters of support that were included in the packages.

Among those volunteering were Entergy Nuclear Design Project Engineer Bruce Mainka and his family, from Vicksburg. Bruce was joined by his wife, Alicia, and son, Bryson, a first-grader at Bowmar Elementary.

To make the event even more special for the Mainka family, they had the opportunity to FaceTime with their son, Will, who serves in the Air Force and is currently deployed overseas. Will, although overseas, is stationed in Suffolk, England at Lakenheath Royal Air Force Base.