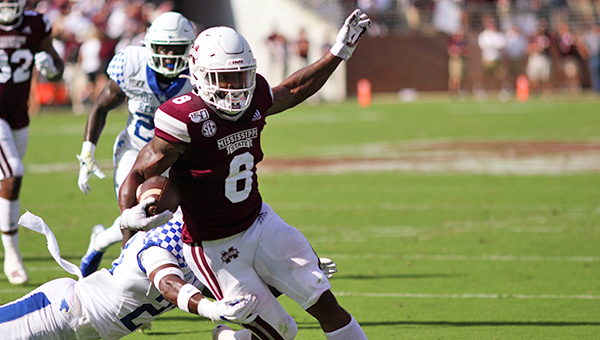 Mississippi State running back Kylin Hill (8), who led the Southeastern Conference in rushing this season, announced Wednesday that he will return for his senior season. Hill had earlier said he would enter the 2020 NFL draft. (Walter Frazier/For The Vicksburg Post)

STARKVILLE (AP) — Mississippi State running back Kylin Hill and linebacker Erroll Thompson have decided to return to school for their senior seasons rather than enter the NFL draft.

Their announcements come less than a week after Mississippi State hired coach Mike Leach away from Washington State.

The decision represents a reversal for Hill, who had said last month he planned to enter the draft. Mississippi State announced Thursday that both Hill and Thompson are staying with the Bulldogs.

Hill rushed for 1,350 yards this season and ranked third in the Southeastern Conference. He gained 5.6 yards per carry, ran for 10 touchdowns and earned first-team all-SEC honors. 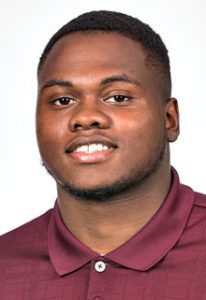 Hill needed 28 yards in Mississippi State’s Music City Bowl loss to claim the school’s single-season rushing record, but left the game early with an injury and only got 3 yards on seven carries.

“Mississippi State University means so much to me,” Hill said in a statement on Twitter. “When I stepped off the field after the final game of the season last month, I thought it was my last time in maroon and white. After careful consideration, I’ve decided to return to Mississippi State for my senior season. I’m thankful and blessed for these last three years, but I’m also excited for the opportunity to play my final season in the Coach Leach era of Mississippi State football and continue the pursuit of my degree. There’s some unfinished business to take care of with my brothers. The work has already begun. Let’s ride.”

Thompson, a team captain, has recorded 217 career tackles, including 84 this season. He’ll enter his senior season with 29 consecutive starts and back-to-back seasons with 80-plus tackles.

“I can’t even put into words what this place and this family means to me,” Thompson said in a statement announcing his decision. “Really and truly, I’m thankful and blessed for these last three years at Mississippi State University. But my story isn’t done being written.”

Pelch steps down as Millsaps football coach to become AD

JACKSON — After leading Millsaps College’s football team for 10 seasons as head coach, Aaron Pelch is stepping down to... read more