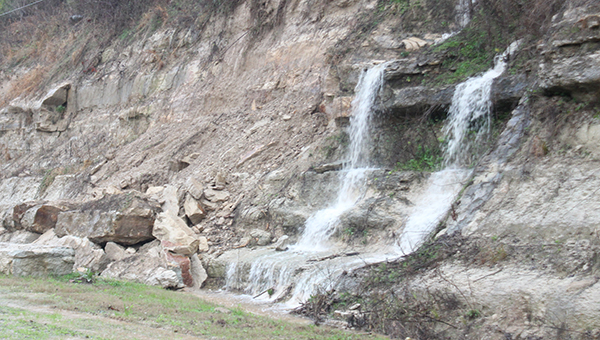 Water cascades down the side of a cliff near a cleared mudslide area on North Washington Street north of the Klondyke. City street crews spent part of Tuesday clearing slides off North Frontage as a record-setting 3.5 inches of rain fell on the area. (John Surratt/The Vicksburg Post)

For the second time in less than two weeks, Vicksburg was deluged by record-setting rainfall.

According to records at the National Weather Service office in Jackson, a total of 3.5 inches fell in the Vicksburg and Warren County area, breaking the 53-year-old record of .94 inches set in 1967.

Jan. 3, 3.44 inches of rain fell in the Vicksburg area, shattering the previous record of 1.86 inches for the same date in 2019, according to Weather Service records. The record precipitation for both days has contributed to a total rainfall of 8.91 inches — 6.71 inches over the normal rainfall of 2.20 inches for the period.

Thursday’s forecast calls for a 40 percent chance of rain.

The heavy rain began falling early Tuesday morning, causing problems with water over the roads and slides in the northern part of the city.

Warren County Emergency Management Agency Director John Elfer said a woman was rescued by an off-duty Vicksburg firefighter after her car ran into high water at the intersection of Old Mississippi 27 and Paxton Road.

He said the firefighter, who came on the scene, waded into the water and had the woman out by the time help arrived.

Vicksburg street department superintendent Skipper Whittington said there were scattered reports of flooded roads in the city, and problems with landslides on North Washington.

“We had to shut down North Washington Street for 10 minutes or so while we got the mud back off the road and rocks out of the road,” he said. “We’ll have to wait until this rain stops before we can get back up there and start cleaning up.”