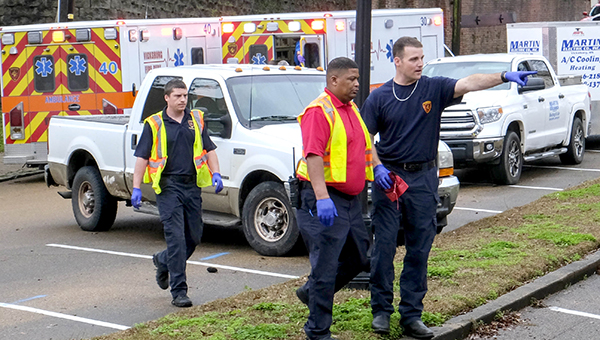 Emergency medical teams responded to a building at the corner of Monroe and Clay Streets Wednesday where two men fell from the roof. Both are hospitalized at University of Mississippi Medical Center. (Courtland Wells/The Vicksburg Post)

Sometime after 9 a.m., emergency medical teams were dispatched to a building at the corner of Monroe and Clay Streets on reports the two men had fallen from the roof of the two-story building.

Those two men, The Post has learned, are Dickie Martin, owner of Martin Electric, and developer Darryl Hollingsworth.

Hospital officials confirmed one individual is currently in critical condition, while the other in stable condition. Due to patient privacy guidelines, the hospital did not say which individual was listed in which condition.

Martin said the preliminary investigation has led officials to believe slick conditions on the roof may have led to their fall. He added the incident remains under investigation.

He added both individuals were transported to UMMC by ambulance.