Aranda, Brady moving on from LSU 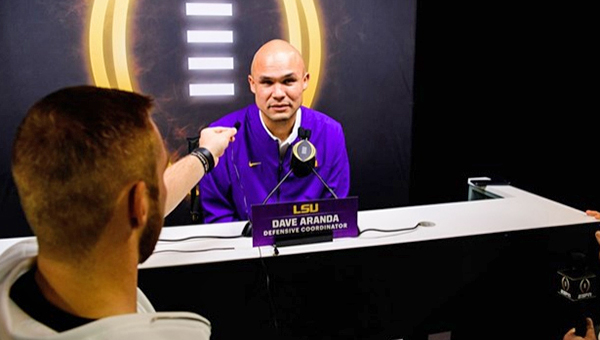 LSU defensive coordinator Dave Aranda has been hired as the head coach at Baylor. (LSU Athletics)

WACO, Texas (AP) — For the second time this week, LSU is learning the price of success as it seems poised to lose one of its top assistant coaches.

Baylor hired LSU defensive coordinator Dave Aranda as its new head coach Thursday, three days after the Tigers completed their undefeated national championship. Aranda, a head coach for the first time, takes over a Big 12 program in much better shape than it was when Matt Rhule got there more than three years ago.

Rhule was hired by the NFL’s Carolina Panthers on Jan. 7 and has also looted LSU’s staff. On Thursday, the Panthers officially announced that they’ve hired passing game coordinator Joe Brady as their offensive coordinator.

Aranda and Brady helped lead LSU to a 15-0 season and a national championship, capped by a 42-25 win over Clemson Monday in New Orleans.

“I’m excited to get started as a Baylor Bear. From the outside looking in, I was so impressed watching Baylor play,” Aranda said in a statement that was included in Baylor’s announcement of his hire. “Seeing the unity of the team and the togetherness of their play really illustrated a strong culture. I’m ready to touch down in Waco and get to work.”

Aranda, the highest-paid college assistant at $2.5 million a season, was a Power Five defensive coordinator the past seven seasons. He was at Wisconsin from 2013-15 before a four-year run at LSU.

There were also stops at Delta State, Southern Utah, Hawaii and Utah State. Aranda was the co-defensive coordinator at Delta State in 2007 and helped the Statesmen win the Gulf South Conference championship.

The 43-year-old Aranda takes over a team seemingly on the rise. The Bears lost to Georgia in the Sugar Bowl, but finished 11-3, reached the Big 12 championship game, and were ranked 13th in the final AP Top 25 poll.

It was a vast improvement from the 11 losses Baylor endured in Rhule’s debut season two years ago, when he arrived from Temple to a depleted roster and turmoil in the wake of the sprawling sexual assault scandal at the private Baptist school that led to the firing of two-time Big 12 champion coach Art Briles.

Aranda began his college coaching career in the Big 12 as a graduate assistant at Texas Tech from 1999-2001, and Briles was an assistant there. He was linebackers coach at Houston from 2003-04 after Briles became head coach there.

“Today is an exciting day for Baylor,” Baylor athletic director Mack Rhoades said. “Dave is a special person who loves football and his student-athletes, is highly intellectual, and is a great mission fit for both Baylor athletics and the university at large.”

Brady’s departure was first reported Tuesday night, and made official when the Panthers announced his hire Thursday. He signed his contract on Wednesday.

Brady won the Broyles Award given annually to the top assistant coach in college football after helping the Tigers obliterate nearly every school and a host of NCAA and Southeastern Conference passing records on their way to the national championship.

LSU finished first in the nation averaging 568.5 yards and 48.4 points per game on offense, and quarterback Joe Burrow won the Heisman Trophy.

“To win a national championship with all the hard work those players put in and to be able to call yourself a champion at the college level — that’s something they can’t take away from you,” Brady told the Panthers’ team web site Thursday. “And now here I am in Charlotte representing the Panthers. It’s hard to put into words. But I’m really excited for the future.”

Behind Burrow, the Tigers finished second in the Football Bowl Subdivision in passing offense with 401.6 yards per game. Burrow completed 76.3 percent of his passes to lead the nation and set a new FBS single-season record with 60 passing touchdowns.

Before joining LSU, Brady spent two seasons as an offensive assistant with the New Orleans Saints.

He helped the Saints win back-to-back division titles while finishing third in the NFL with 911 total points scored in those two seasons. With Brady on the staff, quarterback Drew Brees posted a cumulative passer rating of 109.5 over those two seasons, second-best in the NFL.

Before the Saints, Brady spent two years as a graduate assistant at Penn State from 2015-16. He started his coaching career at his alma mater William & Mary, coaching linebackers from 2013-14.

In Carolina, Brady inherits an offense with uncertainty at the quarterback position. Cam Newton is rehabbing from a foot injury, and his status with the team remains unclear. The Panthers can clear $19 million if they trade or release Newton.

“It’s happened fast,” Brady said. “But look, these are the opportunities you look forward to, the reasons you coach.”