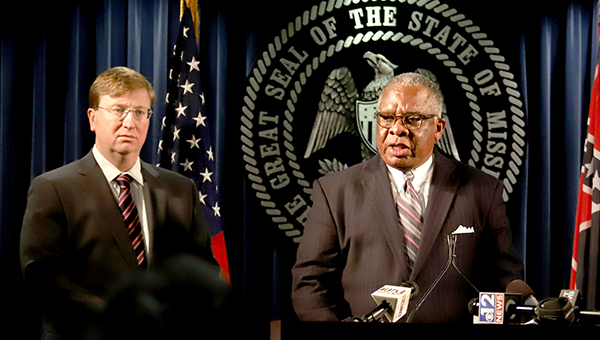 Mayor George Flaggs Jr. addresses the media during a press conference Thursday where he was introduced by Gov. Tate Reeves to lead a national search for a new commissioner for the state’s prison system. (Larry Walker/City of Vicksburg)

JACKSON — Gov. Tate Reeves Thursday announced the state will conduct a nationwide search for a new commissioner to lead a state prison system that’s reckoning with what he called a “catastrophe” — a recent outburst of deadly violence and longstanding problems with vacant jobs and damaged facilities.

That search for a long-term commissioner will be led by Vicksburg Mayor George Flaggs Jr. who joined Reeves at Thursday’s press conference in Jackson.

Reeves also said the Mississippi Bureau of Investigation will assign an officer to the Mississippi State Penitentiary at Parchman to uncover any criminal activity connected to the violence.

“As a husband, as a father and as governor, it is my duty to protect your loved ones just as I would my wife, Elee, and our three girls,” Reeves said at a news conference. “We have all seen the catastrophe that the current state of our prison system has allowed for. There will always be bad people in the world who wish to inflict pain on others. … We will never fully eradicate evil, but we can do better than this.”

At different times, Flaggs and Taylor each served as chairman of the state House committee with oversight of prisons.

During his time in the House, which spanned from 1988 to 2013, Flaggs not only chaired the House committee with oversight over corrections, but also served as chair of the juvenile justice and banking and finance committees.

“It is a solemn honor to be here today—to be able to lend my experience to the work of finding a leader for the Department of Corrections who can reform this department,” Flaggs said. “Change at the top there is critically needed.”

Flaggs said the committee appointed by Reeves takes their role seriously to find a leader who can solve the problems faced by the state’s prisons.

“We have a duty to get this right. I know that the governor understands the importance of the task he has inherited. I know he takes it seriously. I am grateful that he has trusted us to provide a recommendation,” Flaggs said. “It is a wise leader who listens to the people he serves. That is what we represent and that is how we will conduct ourselves: As concerned citizens who have the ear of the governor, and are eager to help search for a great new leader for this system.”

Others on the search group are two district attorneys, a judge, a former state Parole Board member, a current sheriff and a retired sheriff.

One of the district attorneys, Jody Owens of Hinds County, previously worked for Southern Poverty Law Center, a group that has questioned harsh living conditions in the prisons.

The retired sheriff, Greg Waggoner of Leake County, helped federal authorities investigate a corruption case against a former Mississippi corrections commissioner who was arrested in 2014 and is now in federal prison.

Reeves served the past eight years as lieutenant governor and was inaugurated as governor on Tuesday.

He is replacing some state agency directors and keeping others.

Pelicia Hall had been commissioner of the Mississippi Department of Corrections since 2017.

She announced Dec. 31 that she would leave the job in mid-January, which coincides with the transition from former Republican Gov. Phil Bryant to Reeves.

Between Dec. 29 and Jan. 3, five inmates were killed and an undisclosed number of others were injured in violence inside the prisons.

More than two dozen inmates sued the state Tuesday, saying understaffed prisons are “plagued by violence” and inmates are forced to live in decrepit and dangerous conditions. All of the plaintiffs have been inmates at Parchman.

Because of damage caused during the unrest, hundreds of prisoners were moved from one unit at the Parchman to another unit that closed years ago because of decrepit conditions. The state then entered an emergency contract to move 375 of those inmates to a private prison nearby.

Hall said in a news release Monday that even after moving the 375 inmates, the state would have to find different housing for 625 other maximum-security inmates who had been housed at Parchman’s Unit 29, which was damaged in the violence.

Hall and her predecessors repeatedly told Mississippi legislators that prisons have too few guards because the pay is low and working conditions can be dangerous. As lieutenant governor, Reeves was one of the top budget writers.

State corrections officials are seeking an additional $67 million for the budget year that begins July 1 at the three state-run prisons.

That would allow them to hire 800 more guards, raise guards’ starting salaries from the current $25,650 to $30,370, and increase pay for current employees.

Bryant sought some increased prison funding, but not as much as $67 million. Top legislators are recommending that Mississippi spend even less next year than this year.

Reeves said Thursday that he would support increasing the pay for prison guards. He also said he won’t rule out the possibility of sending more state inmates to private prisons.