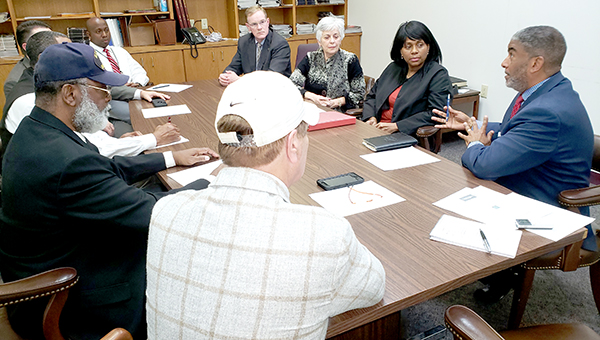 Two faith-based programs are co-sponsoring a regional adopt-a-school and leadership training seminar with the Warren County Youth Court to encourage area churches, pastors and community leaders to get involved in the community and change the lives of children.

The program is Thursday from 8:30 a.m. to 4 p.m. at the George-Oakes Building on the Hinds Community College Vicksburg Campus. Registration is $75.

The youth court is working with Unite Mississippi, a nonprofit organization based in Flowood and established to eradicate division among the people of the state of Mississippi, and The Urban Alternative, a Dallas, Texas-based Christian Bible teaching and resource ministry, to bring the program.

The Urban Alternative, which sponsors an adopt-a-school program involving churches in Dallas, will provide training for the seminar. Lunch will be provided by the Mississippi Tobacco Free Coalition.

Michelle Johnson, Unite Mississippi Vicksburg coordinator, said the idea for the seminar came from a discussion with Warren County Judge Marcie Southerland, who is also the county youth court judge.

“She wanted to have some alternatives to help some of the young children she serves. Not just to look at them and use the justice system but to see what we could do to help,” Johnson said during a program organization meeting Thursday that included Unite Mississippi officials.

Southerland said her idea was influenced by pastor James Bowman, who with other pastors in the community has been working at the youth court with some troubled children and families.

“What we are attempting to do, since I’ve been judge, is look behind the reason that child is there —what has caused the child to misbehave,” she said. “Pastor Bowling has been instrumental in working with some of those kids.”

Johnson said local organizers hope that by having Unite Mississippi’s help in organizing the program “any person who is a Christian person who wants to come and mentor, and church leadership can come and get training and see what they can do to help local schools.

“That will actually reduce the rate, we’re hoping, of children being referred to the county youth court.”

The goal, Johnson said, is to train residents and church leaders about mentoring and working with school officials during the seminar “and then we’re going to meet again to help them utilize the training.

Bill Collins with The Urban Alternative, said churches have the capability to support school systems and help children. He said the organization’s church adopt-a-school program in Dallas has been in operation for 35 years.

“What we’re not doing is proselytizing,” he said. “What we are doing is trying to help kids. In today’s world, kids are hungry — 51 percent of students attending public schools live below the poverty line.

“Churches can help schools get children food, but there are other ways they can help support schools. I’m not talking about preaching, I’m talking about supporting the schools’ effort to facilitate the education process.”

One of those ways is by mentoring. Vicksburg Warren School District Superintendent Chad Shealy said mentors can help reduce the number of absentees in school, adding, “You can talk about college students who have positive mentors. When you look at poverty, only one out of three students have a positive relationship with an adult.”

“We (churches) are a viable part of this community and this is for churches to be stakeholders in the community,” she said. “We are not preaching the Bible, but giving children hope like we have.”

Unite Mississippi Chairman Chip Miskelly said the goal of the program is to “help kids who did not get the proper training at home or have fallen through the cracks.

Warren County authorities have charged one person and are looking for another in the reported theft of a utility vehicle... read more