Konontsuk goes from unknown to star for Southern Miss 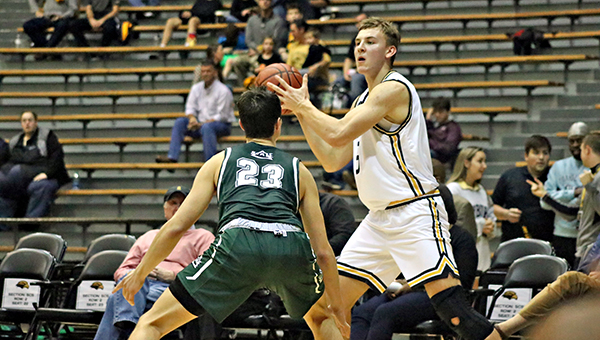 Southern Miss forward Artur Konontsuk looks to pass the basketball earlier this season. The 6-foot-7 native of Estonia was recruited by USM’s new coaching staff, but did not meet any of them until coming to campus last summer. (Southern Miss Athletics)

HATTIESBURG — Every August, millions of students begin their freshman years on American college campuses. Some go far, and some stay close.

Southern Miss men’s basketball freshman and Parnu, Estonia, native Artur Konontsuk did not meet head coach Jay Ladner — or anyone from the school — until he moved into his dorm.

“We were in such a unique situation,” Ladner said about being hired in April. “We were just so late and our (recruiting) needs were so great that we had to take a leap of faith, and thank goodness it paid off. We did a lot of talking to Artur, and he had checked out with a lot of people we trusted in basketball. That’s the first, and hopefully last, time we will sign a player we haven’t seen.”

Ladner cannot help but laugh at how things have turned out so far, as Konontsuk has gone above and beyond in embracing the challenge. Standing at 6-foot-7 with a friendly smile, the forward has started nine games and scored in double-figures five times, including a career-high 19 against now-No. 1 Gonzaga in November.

Konontsuk and the Golden Eagles, fresh off three consecutive road games, are finally home again Thursday and Saturday to take on North Texas and Rice, respectively.

Ladner says his goal is always to put the best player out there no matter their age, but this team’s vast youth has helped Konontsuk gain the opportunity to start. Ladner described the forward as a “shot in the arm for us.”

“For us to be able to sign a player like Artur with his size, skillset, experience that late was something we felt we got a good one,” Ladner said. “He comes from the Get Better Academy in Prague, an outstanding program. He’s a hard-working kid and there are great things in store for him as he continues to build his career.”

Konontsuk began playing basketball when he was 7 years old, inspired to follow in his brothers’ footsteps. The oldest, Bogdan, played at McLennan Community College in Waco, Texas, while his middle brother played in Estonia’s pro leagues.

Artur said he was one of the shortest kids in his class growing up, but grew four inches in one year in high school.

Konontsuk eventually made it on the Estonian national team in the summer of 2018, and it was a trip to Macedonia where his recruitment took off. Julian Betko, a former Butler captain under renowned head coach Brad Stevens, runs the Get Better Academy in Prague, Czech Republic, a premier basketball development center. It was a former teammate of Konontsuk’s that put in a word for Betko. Konontsuk enrolled that fall while taking classes online to complete his high school graduation.

“My goal was always to play college basketball in the United States,” Konontsuk said. “The Get Better Academy was a great opportunity for me. Coach Betko had a lot of contacts out here. They made a highlight video of me and sent it to colleges all over the United States.”

It was a mutual acquaintance of Southern Miss assistant coach Kyle Roane that sung Konontsuk’s praises to the new Golden Eagles staff — complemented by impressive game film — and except for conversations over WhatsApp and FaceTime, a 5,000-mile bond between strangers was established.

“That was when it kicked in,” Konontsuk said of the recruitment. “I had signed my letter of intent. I wasn’t a kid anymore, and it was a big step in my life. I’m pretty much independent now and manage things by myself. Everything is opening up.”

Konontsuk also credits Garland Wilson, the team’s director of basketball operations, for assisting him with the transition upon signing his NLI. If the first few months are any indication of Konontsuk’s persona, the university, and not just the basketball team, found themselves a gem.

“I’m a social person, so it’s not very hard to make friends here,” he said. “I think every person needs someone to talk to. I’ve found friends that have helped me get over this hump.
“I knew that college life is a dream for every student,” he added. “Everyone would like to experience that. The people are really nice and love European accents. I was told about that before I came, so I expected it.”

Fellow freshman Auston Leslie, who hails from Huntsville, Ala., admits he didn’t know much about Estonia prior to Konontsuk’s arrival, but that he’s learned about their different foods and how “Russia buys a lot of milk and dairy products from them.”

“As a teammate, he’s a really good guy,” Leslie said. “I love him to death. He’s a lot more advanced based on the exposure he got in Europe. I’ve learned a lot from him just by talking to him. He’s a real good asset to our team, and also as an individual.”

Konontsuk, who speaks English, Estonian and Russian, is majoring in marketing. He says he hopes to play professionally, but if not, he will most likely return home and search for jobs and even take more courses on business.

“I want to get better as a player but also to experience new things in life,” he said. “I want to enjoy the college life.”