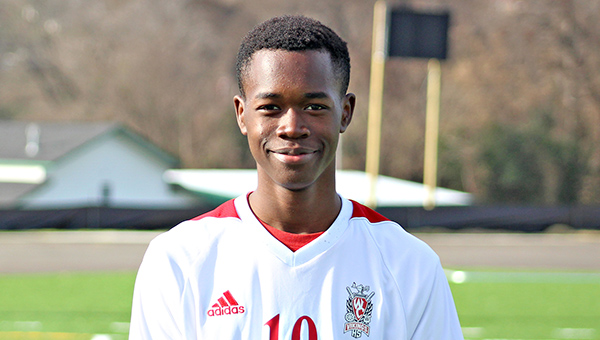 Warren Central’s DeQuarian Buck scored two goals, including the game-winner in overtime, to lead the Vikings to a 3-2 victory over Clinton on Wednesday.

One goal changed the entire trajectory of Warren Central’s season.

DeQuarian Buck scored the go-ahead goal in overtime Wednesday to give the Vikings a 3-2 victory over Clinton and a shot of adrenaline in their quest to reach the MHSAA Class 6A boys soccer playoffs.

Warren Central (13-4, 2-2 Region 4-6A) would have been eliminated from contention with a loss. Instead, it will go on the road Friday to Madison Central (14-0-2, 3-0) with its postseason hopes very much alive. The Vikings must win Friday and again vs. Murrah on Tuesday, and have Madison Central beat Clinton on Tuesday.

Clinton (8-4-1, 1-2) owns the head-to-head goal differential tiebreaker over Warren Central by virtue of its 7-2 victory in December, and would get in ahead of the Vikings if those two teams wind up tied.

“If Madison Central beats us, we’re out. They’re ranked No. 2 in the state, so it won’t be easy, but it’s something we have to do. It’s a long shot, but it’s a shot,” Warren Central coach Greg Head said.

No matter the outcome Friday in Madison, Head said Wednesday’s win was validation for a solid season that might not wind up the way the Vikings would like. Warren Central is No. 11 in MaxPreps.com’s Mississippi rankings, but is in danger of missing the playoffs because of region losses to No. 2 Madison Central and No. 4 Clinton earlier in the season.

The latter was a particularly ugly defeat on Dec. 17 that did not inspire much hope heading into Wednesday’s rematch. Rather than folding, however, the Vikings jumped out to a 2-0 lead at halftime. Tony King scored in the 17th minute and Buck in the 34th.

Clinton scored in the 53rd and 59th minutes, and the game went to overtime tied at 2.

In the fourth minute of overtime — which consists of two 10-minute periods and is not sudden death — Buck scored off an assist from Josh Griffin to give the Vikings a 3-2 lead. The defense and goal keeper Ben Vroman made it stand up over the last 16 minutes.

Clinton outshot Warren Central 19-9 in the game, with 11 of its shots making it on goal. Only three of its shots came in overtime, and two missed wide. Vroman made nine saves.

“My defense really stepped up, and Ben played a great game. He’s improved a lot this season, and he’s going to help us out (Friday) night,” Head said.

Now the Vikings will head to Madison seeking another upset. The Jaguars won the first meeting between the teams in November, 2-0. Head said Wednesday’s win will give his team not just momentum, but confidence that it can be counted among the top teams in the state.

“It’s going to help us going into (Friday) because we know we have a shot. They worked their butts off and stepped up,” Head said. “It’s a big booster knowing we can beat these teams and have a chance to win and go to the playoffs, even with having to play two of the top teams in the state. We know we can hang with them and play with them, and make sure no one gets hurt or red-carded.”